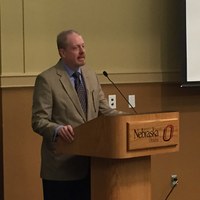 Created in 2011 to honor Professor Kent Kirwan who retired from the University of Nebraska Omaha's political science department in 2002, the annual Kent Kirwan Lecture in the History of Political Philosophy has been delivered by renowned political theorists such as Catherine Zuckert and Walter Nicgorski.

"The 2016 election demonstrated that the Electoral College is still an important and controversial part of America's political system, so we wanted to get a nationally-known expert to lecture on the Electoral College and its role in our nation's history and politics," said Carson Holloway, PhD, a political science professor at the University of Nebraska Omaha in charge of coordinating the series. “We knew Gary Gregg was the man to get and, we were delighted he agreed.”

“I have said a lot about the Electoral College since the 2016 election, but this was a special lecture that asked me to explore more deeply the origins and development of the Electoral College,” Gregg said. "I was honored to be asked to deliver the Kent Kirwan Lecture."

Gregg has been one of the most sought after Electoral College specialists over the last few months, appearing on national radio and television programs and being quoted as an expert in publications as prestigious as the New York Times and major news outlets in several European and South American nations.

“The Founders wanted a deliberative system to select our presidents,” Gregg argued. “They believed good presidents would be chosen like good legislation would emerge from Congress: through discussion, deliberation, compromise, and reasoning together. In our divisive age and in our time when we seem not to actually be deliberating on anything in politics, it's a valuable corrective lesson.”