(April 18, 2017) LOUISVILLE, Ky. – The council of six will represent their fellow scholars to the University of Louisville and the community at large. 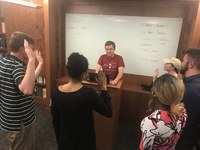 McConnell Scholars hold yearly elections, voting their peers as “leaders among leaders” for council activities. The following students were elected at the April 17 general body meeting:

Robert Gassman, a political science, Asian Studies and history student from Louisville, was elected to the office of Chair. His duties will include presiding over council meetings, attending conferences on behalf of the McConnell Scholars and interacting with McConnell Center staff regarding Scholars’ activities.

“I am honored to serve alongside some of the best and brightest leaders in our Commonwealth,” Gassman (’18) said. “I look forward to engaging the community and the university as we strive for excellence and promote leadership, scholarship and service.”

Macey Mayes, a political science student from Central City, was selected for the Vice-Chair position. Her responsibilities will include representing the McConnell Scholars at campus events, as well as assuming other council member duties as necessary.

Natasha Mundkur, a political science and marketing student from Louisville, was re-elected to chair the Service committee. She will coordinate philanthropy projects in the Louisville area and oversee Scholar community service hours.

X’Zashea Lawson-Mayes, an Industrial Engineering and Pan-African Studies student, was selected to chair the Outreach committee. Her responsibilities will include coordinating Scholar recruitment ideas, strategies and practices. She will also represent the McConnell Scholars program at recruitment events throughout the state.

Kyle Hilbrecht, a political science student from Louisville, will serve as chair of the Alumni Relations committee. His position will be responsible for communicating news about the McConnell Scholars events and activities to an ever-growing alumni contingent. He will also connect with alumni regarding opportunities to mentor current McConnell Scholars.

Evan Clark, a political science student from Owensboro, will serve as Secretary.

A seventh position, freshman liaison, will be elected this fall from the incoming cohort of McConnell Scholars.

The council of seven will represent their fellow scholars to the University of Louisville and the community at large.