Getting to know Louisville Law alumni

Dean Crawford shares one of the best part of his job: connecting with alumni. 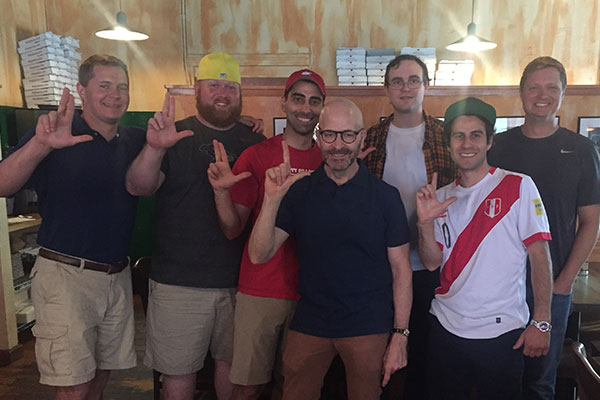 Dean Crawford displays his school spirit with a group of 2011 law school alumni.

One of the great pleasures of this new job — perhaps the greatest pleasure, next to getting to know our students — is getting to meet our alums and learn about their lives and careers. Two recent experiences really brought the truth of this fact home for me.

The first was a reunion the School of Law hosted for members of the classes from 1969-1971. These were small classes due to the Vietnam War, which is why we combined the reunion group. The impulse for this was the return to campus of Murray Klein, class of 1970. Murray, who now lives in California, had not been back to the School of Law for years and returned to award a very generous scholarship to third-year student Bethany Beal. 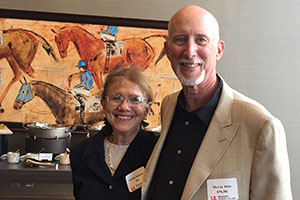 Martha Schecter and Murray Klein, both of the Class of 1970

The scholarship was created by Murray and his wife, Elayne, in honor of his mentor, a fabled teacher at the school, the late William Read. We held the event at the Omni Hotel, downtown Louisville’s newest smart spot.

I saw some already familiar faces, like the always amiable Wyatt partner Grover Potts (class of 1969), and also made some news friends, like the Pikeville lawyer John Baird, class of 1971, and Richard Beliles, class of 1971, the Kentucky state chair for Common Cause.

I also met Martha Schecter, class of 1970, whose fame preceded her. Martha is a longtime legal aid lawyer and since I arrived in January people have told me she is someone I need to meet. Why so? Because she is known and respected as someone who has spent her career working to make this a better place. Martha still sizzles with the intensity of her social commitment and I hope we can lure her back to campus this year for some women in law leadership events we are planning. 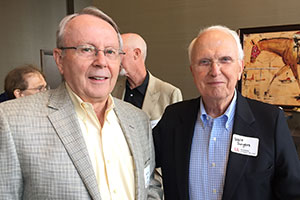 This event was bracketed for me by yet another reunion — the reunion of a group of men from the class of 2011: John Nawara, Ryan Polczynski, Kyle Samons (UofL football fans may remember Kyle’s star career as the “white thunder” as a Louisville running back), Greg Thompson, Fernando Valdizán and Gulam Zade.

This group, which formed in law school, calls itself the “B-90.” That is “B’ as in ”bottom” and 90 as in 90 percent — those who were not getting the fancy law firm jobs from law school. These guys gather every year, coming from far and wide — Columbus, Ohio; Nashville, Tennessee; Morgantown, West Virginia, and yes, from Louisville, to relive old times and to plan their fantasy football leagues. Sadly, not all of them could attend that Saturday at a pizza parlor in the Highlands, but the ones I met were an incredibly diverse bunch: a lawyer for the Social Security Administration, an in-house counsel recently named as one of Nashville’s “40 Under 40,” a crazily busy plaintiff’s attorney and a sports agent, to name just a few.

Most impressively of all, what may have been a bit of a regret in law school — to be part of the “B-90” — was now a badge of honor: All of these guys have, in a relatively short time, established very successful careers, a testament to the fact that class rank is not everything. They are also very loyal alums and promised to start a scholarship endowment later this year.

These meetings were welcome occasions to me for another reason. This School has not had a great tradition of reunions — something I hope to change. Indeed, we will soon be sending out notices for an all-class reunion on the Friday of Homecoming weekend, October 26. We have never done this before.

At that event, I will be announcing plans to start having small, class-based reunions. Whenever possible, we hope to do these at the School of Law. Indeed, the 1969-1971 alums asked why we had not brought them back to campus, “to visit the old place.” We plan to start doing that, and soon!