Professor Marc I. Steinberg was the speaker for the 2019 William Marshall Bullitt Memorial Lecture in Law. 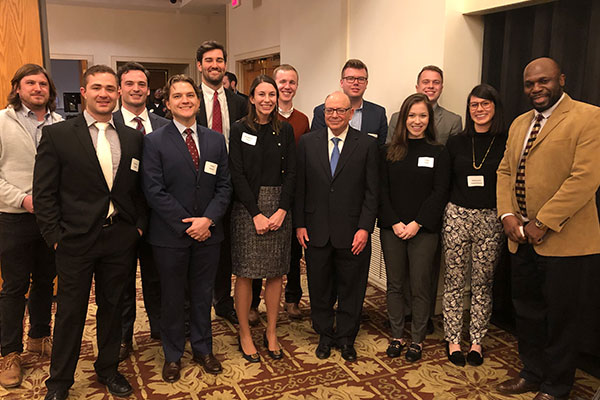 As an environmental and property law scholar, corporate law isn’t an area where I have done much work. So I was thankful when my colleague Manning Warren arranged to bring in his friend and co-author, Professor Marc I. Steinberg of SMU’s School of Law, for this year’s William Marshall Bullitt Memorial Lecture in Law, held February 28.

Professor Steinberg, Rupert and Lillian Radford Professor of Law at SMU’s Dedman School of Law, presented "The Securities and Exchange Commission vs. Mark Cuban – A Trial of Insider Trading."

I was thrilled to see members of the local bar, as well as many law students, attend this important lecture, made possible through the generous support of Lowry Watkins, Jr., in honor of his grandfather, the Honorable William Marshall Bullitt, former Solicitor General of the United States.

Professor Steinberg’s resumé is an impressive one. He has written more than 150 articles and 36 books. In addition to SMU, has taught at the University of Maryland School of Law, the Wharton School of the University of Pennsylvania, the National Law Center of George Washington University and Georgetown University Law Center, as well as international appointments in at law schools in 13 countries.

He was an adviser to former U.S. Supreme Court Justice Arthur J. Goldberg for the Federal Advisory Committee Report on Tender Offers and is a Former enforcement attorney and special projects counsel at the SEC.

Suffice it to say, the University of Louisville School of Law is fortunate to have had such an accomplished legal scholar as a guest speaker. I want to again thank Professor Steinberg for sharing his time and expertise with us.

See a full gallery of photos from the event.