The installation is inviting curiosity, interactive play, and novelty in an everyday environment.

1) How do people respond to an unusual object in their normal environment?
2) How can it continue to solicit their attention once the novelty has worn off?

The box is programmed with different groups of sounds: environmental sounds (birds, goats, car crashes, etc.), sounds of people (laughter, singing, vocalizations, recognizable voices), and musical sounds. Some of these sounds can be deliberately triggered and manipulated, while others are triggered at random or at scheduled intervals (for instance, a grandfather clock chiming the hour). The box has the appeal of a game or puzzle—many passersby spend time discovering what the box can do and also if and how they can make the box produce a desired sound again.

The box is also programmed with a set of sounds that are only triggered if it is left untouched for a period of time. These are designed to entice, manipulate, or annoy passersby to interact with it. Such behaviors include an upbeat salesman-like pitch, whistling, crying, growling, and producing an exceedingly long tone.

Swapping out some of the box's sounds to include more locally specific sounds can personalize the experience and make it more attractive to people in new locations. For example, recognizable voices can be traded for new recordings from favorite local teachers, celebrities, or community figures. Environmental sounds could include unique noises or themes that they would commonly hear in their own city or state (such as a football chant or their local ice cream truck).

In Coils, metal springs are suspended from a concealed point and are activated by an unseen source. The sound and video in the work operate separately, designed to meet tangentially at specific moments. This relationship creates an artificial environment in which sounds are, at times, associated with their causation, and superficially displaced from it at others.

Submerge is an immersive public sound, light, and visual installation that gives visitors an abstract impression of being underwater in a common hallway space. The installation is a project by the class members of Advanced Topics in Computer Music (MUS 668). Through the use of a motion sensor and a microphone, visitors can trigger and affect the sounds produced in the installation space. The installation also consists of blue lights, organza cloth, and Styrofoam balls to create an ambient environment reminiscent of underwater surroundings.

Bouncing is an interactive audio-visual installation. It uses a kinect controller to project an avatar of the user inside of a virtual room which is, in a way, a reflection of the space the user is standing in. Collisions with the bouncing objects inside of the virtual room give the sound feedback and help to create a sound composition in 4 channels surround space, thus blending virtual and actual space. Different modes of operation allow various methods of user interaction ranging from purely observational to actively controlling the environment.

Remote Connections combines recycled materials with modern mobile technology, creating a remote, interactive meeting space. Every day we communicate remotely with others through phone calls, texts, emails, video chat, and social media. The installation enables users to use the mobile technology to transmit and mix sounds created with instruments made from recycled materials.

Courage to Voice is an interactive sound-art installation that seeks to challenge the validity of ideas. Along a corridor are hung several hundred pieces of paper with various quotations and words (in the form of word clouds). Without giving reference or attributing origin, the mass of sentences and words all at once becomes a blur of black figures set against a pale, shivering canvas. The origin of the material is diverse including famous quotes from historical figures (both good and bad) such as Abraham Lincoln and Adolf Hitler in addition to articles from various internet news sites and social media postings. At one end of the installation there is a box with a red button and microphone where participants are asked to record their own expression of an idea. These idea-recordings are played through the 4 speakers hidden above the hung papers and triggered by the motion of passersby. This mix of audio and visual cues is intended to be confusing for the observer, much in the same way that information is thrown at human senses today. The observer may choose to aurally contribute/react to the installation in any means that they may consider valid.

Composer and performer, Adriana Guzmán collaborated with visual artist Lexi Bass to create a performance piece based on “finding God” or spirituality in natural spaces. The piece employed live electronics processing on the performers voice, sine waves, and other sound samples in MAX/MSP. Two fixed videos are projected throughout the piece: one video above the performer deals with the higher ideal or dream of the God, while the video projected onto the performer’s dress deals with the practical activities by which the earthly self occasionally “syncs” and finds oneness with the projected ideal. Projection and ritual were pivotal concepts in this piece.

Reflections is an art and sound installation which interacts with its inhabitants through reflective mediums.  Mirrors surrounding the participants create fragmented and nested images while the sound of the space is processed and reintroduced via a four channel system.  The installation uses only content introduced to it by the participants to create an interactive environment. Audio from the space is constantly collected and analyzed, informing a generative algorithm which processes the incoming audio in real-time.  The sound itself determines how it will be processed and distributed in the spatial field.  As the space attempts to qualify the sounds within it, new spatial, temporal, and timbral structures will emerge in the music. 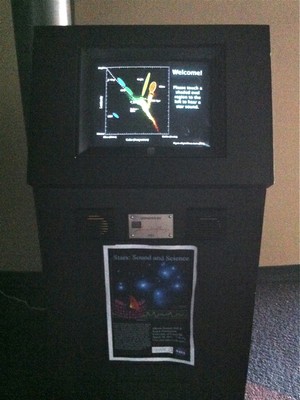 A project funded by the NASA Space Science Student Ambassador program, Stars: Sound and Science consisted of a musical composition, interactive installation (shown here housed at the Gheens Science Hall and Rauch Planetarium), and a scientific lecture geared toward the general public.  The central, unifying concept of these elements is that of asteroseismology, the study of pulsating stars.  Astronomers are able to observe complex periodic variations in the light from a star and use these measurements to determine physical properties such as age, mass, and size of the star.  These cycles may take anywhere from hours to days to complete, and the installation and composition uses actual data from observed stars scaled to the range of human hearing (20 – 20,000 Hz).  Serving as an installation interface is an adapted Hertzsprung-Russell diagram which characterizes stars by their temperature and luminosity but contains marked regions where stars pulsate so that users may choose and “hear” different classes of these fascinating instruments in space.

This is all the NOISE we make sound installation

This sound installation seeks to draw attention to the everyday sounds we hear in the music building, trying to involve them in an artistic and musical environment. The installation plays pre-recorded samples in a random way, along with silent intermissions. The sound material includes various samples of steps and closing doors, and instrumental and vocal sounds. There is also a microphone recording live sounds produced in the space. These sounds are fed into the computer and reproduced later. The software used is MAX/MSP.

Students of the Hite Art Program under the direction of Professor Mary Carothers
Sound: Professors Krzysztof Wolek and John Ritz

Transitivo is a memorial created to honor the thousands of men who perished during the construction of the Panama Canal (1880-1914). These men's efforts mark one of the most difficult engineering projects ever undertaken throughout the course of word history. Because of their dedication, the Panama Canal links the Pacific and Atlantic Ocean and has replaced the long and treacherous route via the Drake Passage and Cape Horn at the southmost tip of South America.

The chakras, in Hindu and Qigong mysticism, are force centers; wheel-like vortices of subtle matter corresponding with seven points on the physical body which are believed to be focal points for the reception and transmission of energies. Beginning at the base of the spine, the lower chakras deal with basic human needs and pleasures working up the spine to the genitals, the solar plexus, heart, the throat, the third eye, and eventually concluding in the ethereal extra-sensory crown chakra. Each chakra is associated with a color and natural element, connecting its body to its physical home on Earth. I wanted to create with my piece, Chakra Study 1, a sense of movement up these spiritual centers of the body, a sanctuary or generic religious space one could find within oneself in our electronic Western society. I chose to include subtle references to religious musical imagery, both Eastern and Western, to evoke a feeling of religion or spiritual connection without labeling a god or belief system. These references are not explicit. The droning introduction is achieved electronically, while the choral movement in the latter half is an emotive improvisation in pure phonetics. For me the process of connecting to my own energy was integral to the cohesive result.
Lexi Bass

Aurelia is a set of glass sculptures that act as projection screens for different films that the user may change with the press of a button. As the films change, so do the sounds associated with those films. The user is meant to explore the sound and visual sets to create sequences that are most appealing to them. There are 5 different pre-set sound banks that we have put together, but the user may choose to play the sounds and visuals as they wish.

East of the City, Edge