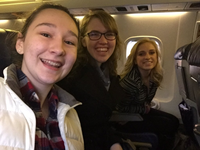 Fourth-year student Philip Moore is also participating in the event.