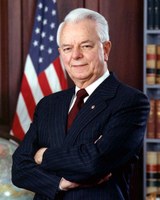 "We extend our condolences to Sen. Byrd's family and the institution of the Senate," said Dr. Gary L. Gregg, director of the McConnell Center.

Sen. Byrd visited the McConnell Center on April 17, 2000. He was the first author of a McConnell Center book and the first contributor to our autographed baseball bat collection now on display by the Chao Auditorium in Ekstrom Library.

In "The Senate: Great Forum of Constitutional Liberty," a monograph published by the McConnell Center in 2000, Sen. Byrd took up three primary topics: the origins and idea of the Senate, how it has developed and changed over time and what the founding fathers might think of the institution we know today in Washington.

"To each question, Sen. Byrd brought a scholarly eye and the understanding of a man who has actually lived the history of which he writes," Gregg said.

The essay is currently out of print, but the McConnell Center plans to reprint it in the near future.