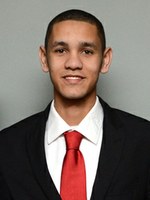 Jewell was invited as a guest speaker to the show in early April to discuss the Louisville Waterfront violence that occurred in March. Jewell and Muhammad, the show’s host, spent the afternoon on air with Louisville media personality Terry Meiners discussing how to effectively reach young African American males who feel they do not fit into a productive part of society.

After the show, Muhammad expressed an interest in appealing to younger audiences and invited Jason to return as a co-host.

As co-host of “Brothers Helping Brothers,” Jewell facilitates discussions on how to best address violence in Louisville, “Stand Your Ground” Laws and the importance of economic prosperity.

“It is clear that the problems that plague our community affect us all, and we must have solutions that involve us all regardless of race, class or religion,” Jewell said. “I have really enjoyed the time I have spent working with Mr. Muhammad and the radio show,” he added.

Jewell, of Louisville, Ky., is a freshman McConnell Scholar at the University of Louisville studying political science and history. He also serves as a senator for the university’s College of Arts and Sciences.