Our History and Traditions 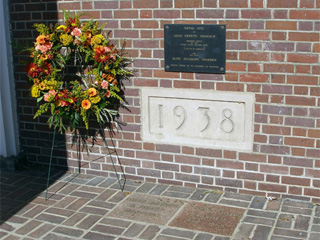 Founded in 1846, the University of Louisville's Brandeis School of Law is Kentucky's oldest law school and America's fifth oldest law school in continuous operation. It began as the Law Department of the University of Louisville and remained so until 1923, when it became the School of Law and hired its first full-time professor.

Justice Brandeis began to invest heavily in the school in 1925. His vision for the school was solidified when Harvard law dean Roscoe Pound proposed to increase enrollments at that school. Justice Brandeis objected, calling instead for smaller, better schools and writing that the time had come to "build a law school of distinction."

As noted by biographer Philippa Strum, Brandeis responded "he wanted 'not a bigger (Harvard Law School), but 20 Harvard Law Schools.' And he immediately set about creating one other Harvard, this one in Kentucky."

He gave the school his personal library, including many rare texts on early civil and common law; his personal papers, comprising approximately 250,000 items; and his money (even buying light fixtures when the law school was located in a downtown building, before moving to its current location on the Belknap campus in 1938).

He also helped raise money from other donors; aided the school in obtaining the papers of Justice John Marshall Harlan, the "great dissenter;" arranged for the school to receive original briefs filed with the United States Supreme Court, a practice the Court still honors; and bequeathed a substantial part of his estate to the University of Louisville.

After his death in 1941, his last remains — and later the remains of his wife, Alice Goldmark Brandeis — were buried unobtrusively beneath the law school's classical portico.

The Law School was renamed the Louis D. Brandeis School of Law in 1997.

As noted by the law faculty in their resolution embracing the Brandeis name, "[t]he legacy of Justice Brandeis has been an historic foundation of the School of Law and is an inspiring charter for its future."

Today, the law school is believed to be America's fifth oldest in continuous operation. The Louis D. Brandeis School of Law is a freestanding building, independent of other units on UofL’s Belknap campus. The law building has more than 82,000 square feet, more than half of which constitute the law library. The building features modern classrooms and wireless technology throughout, as well as a computer lab, lounge area and the Allen Court Room, an appellate courtroom with a seven-seat bench, witness stand, 12-person jury box, counsel tables and a podium, and the Hebel/JAVS Court Room, a trial court room with state-of-the-art audio-video recording and evidence presentation technologies. 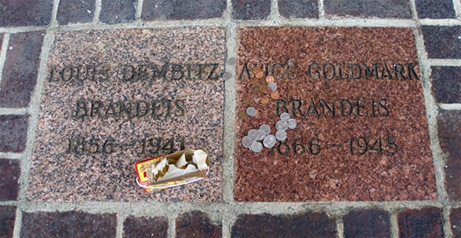 The law school's portico, where the remains of Justice Brandeis and his wife, Alice Goldmark Brandeis, are buried, is a place where students place coins, stones (a Jewish tradition), and occasionally even a box of animal crackers, one of Brandeis' favorite foods. These tokens are often found during the exam period, when students use them in hopes that doing so will bring them good luck during exams.

Also, each year during his birthday week in November, a wreath is placed on the grave. This is also done whenever there is a Brandeis Medal recipient on campus and when a Supreme Court justice visits the law school.