On May 13, I attended my first meeting as a member of the Commission on Continual Judicial Education. The Chair, Justice Bill Cunningham, arrived slightly late because he had been delayed at a Supreme Court Rules Hearing held here at the KBA Convention. Justice Cunningham said that he could scarcely remember a proposed rule that attracted more comment and more diverse points of view on the proposed change to Commonwealth evidence rules. I was also told by another alum, a circuit court judge, that a Brandeis colleague had testified in favor of the rule. Therefore, I was extremely pleased to learn from my colleague, Professor Ariana Levinson, that she had testified and would be willing to share her experience in a guest blog post. Here is what Professor Levinson had to say. 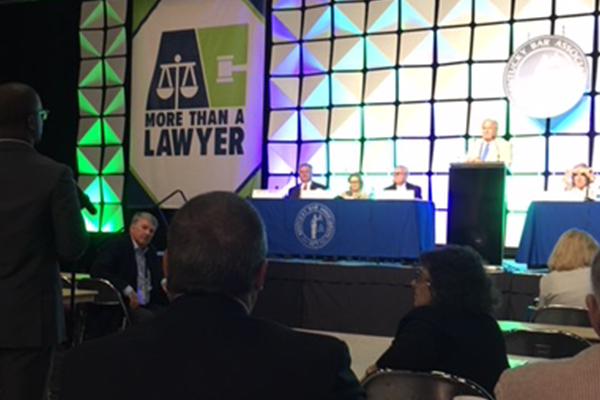 Thank you to Dean Crawford for letting me guest blog about the Supreme Court Rules Hearing at the KBA Annual Convention. Comments on an interesting, and apparently controversial, proposal to amend the Kentucky Evidence rules to add KRE 807, were heard by the Court. The proposed rule provides an exception to the prohibition on hearsay evidence contained in KRE 802. The exception would make admissible, in certain circumstances, out-of-court statements by a child who was physically or sexually abused, about the abuse. You might wonder what I, a law school professor, was doing at this hearing.

I have been teaching Evidence at the University of Louisville Brandeis School of Law since 2011. This past semester, we had a particularly interesting time following the enactment of this hearsay exception through the legislative process. A student in my Evidence course, Samantha Wright, had the wonderful opportunity to work with Kentucky Youth Advocates (KYA) over the semester through a Cooperative Consortium for Transdisciplinary Social Justice fellowship. KYA is a non-profit that advocates for policies and programs that benefit youth. Samantha was the first legal intern the KYA has had, and we are hopeful that future students interested in youth advocacy will also be able to intern with them. Throughout the semester, Samantha reported to the class about the work KYA was doing promoting the exception.

Samantha had the good fortune to be working closely with Terrance Sullivan, who is a 2012 Brandeis graduate. Terrance was inspired by Professor Sam Marcosson to find a position that involved constitutional law. After working at Metro Council, he went on to do work on legislative committees at the Kentucky Legislature, with one of his committees being Election & Constitutional Amendments, and eventually became the policy director at KYA. He loves his job advocating for youth and is happy to speak with any Brandeis law students about alternative career paths that differ from litigation. Terrance and Samantha invited me to speak about the proposed rule change, and that is how I ended up at the hearing.

In preparation for the hearing, another student, Natalie Nelson, assisted me in research about other states that have similar hearsay exceptions. She found the subject matter very interesting and is now following the process of the proposed rule along with us.

At the hearing, I spoke about how the proposed rule 807 incorporates the same level of necessity and indicia of reliability as the existing hearsay exceptions. Terrance provided testimony that focused on the reliability of children’s statements of abuse, the inapplicability of the Confrontation Clause to the statements encompassed within the proposed exception, and the similarity of an Ohio hearsay exception under which an admitted statement of child abuse was upheld by the Supreme Court. He mentioned my colleague Professor Cedric Merlin Powell’s comments, during the Evidence course Terrence took, about the dying declaration exception. He concluded by emphasizing this exception would not be a hammer or screwdriver in a prosecutor’s toolbox, but rather that one special tool that is used only infrequently but is absolutely necessary in that instance (think of IKEA furniture).

I am sure in addition to Terrance, other Brandeis graduates spoke both in favor and against the proposed rule. I was impressed at the diversity of perspectives and the quality of the advocacy, and am proud to be connected with such fine alumni and attorneys.

The Supreme Court is taking written comments through the end of July. The Evidence Rule Commission is chaired by Honorable Justice Venters.