Office of Research and Innovation 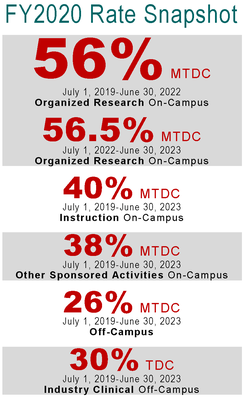 Indirect costs—also known as facilities and administrative (F&A) costs, or overhead—are actual costs that the University of Louisville incurs in its day-to-day operations. Indirect costs include clerical support, library operations, utilities, depreciation of buildings and equipment, physical plant operations and maintenance, sponsored programs administration, and general administrative expenses for central offices such as the president, provost, human resources, and purchasing. These expenses are not readily identifiable with individual projects and therefore cannot be directly charged to sponsors. In order to recover these real costs, they are budgeted and charged to sponsored projects as indirect costs.

As a recipient of federal funds, the University of Louisville is required to negotiate an indirect cost rate agreement with the federal government. The U.S. Department of Health and Human Services (DHHS) is UofL’s cognizant federal agency with whom we negotiate the indirect cost rates for UofL’s externally sponsored awards. UofL’s current Indirect Cost Rate Agreement covers the five-year period beginning July 1, 2018 and ending June 30, 2023.

The following are accepted as full recovery of indirect costs for the applicable types of sponsored projects.

'LABS' to Apply the Right Rate

Indirect costs are assessed on a percentage basis against certain costs of the project — such as salaries, fringe benefits, supplies, travel, consultants, subawards, maintenance contracts, etc. Four key factors are used to help determine the appropriate indirect rate to apply to a sponsored project:

Depending on whether a project is conducted on-campus or off-campus, different indirect rates may apply.

Use the on-campus rate when:

Use the off-campus rate when:

If a project is determined to be off-campus, it is considered wholly off-campus. Separate on- and off-campus rates cannot be applied to a single project.

Knowing the type of activity being conducted is critical to selecting the right indirect cost rate. The activity types negotiated and/or recognized by UofL are:

In this base type, indirect costs are assessed on all direct costs. The TDC cost base is used for agencies or nonprofits when published, universally applied policies restrict indirect cost recovery below UofL’s negotiated rate. TDC is also used for industry-sponsored clinical projects.

The MTDC base is the default base used for federal and most other projects, except when guidelines/terms specify otherwise. Modified total direct costs consist of all direct salaries and wages, applicable fringe benefits, materials and supplies, services, travel, and up to the first $25,000 of each subaward (regardless of the period of performance of the subawards under the award). These form the base to which indirect costs are applied.

Indirect costs are NOT applied to equipment (as defined in UofL's rate agreement), capital expenditures, patient care costs, rental costs, tuition remission, scholarships and fellowships, participant support costs, and the portion of each subaward in excess of $25,000.

The total cost (TC) base includes all direct and indirect costs, with no exclusions. Indirect costs are calculated as a percentage of the total project amount.

If a federal, state, local or international government entity or nonprofit entity such as a foundation has a published rate that is less than the indirect cost rate set forth in our negotiated rate agreement, UofL will accept the entity’s rate; however, documented evidence of the entity’s indirect rate must accompany the proposal. (NOTE: An email from the sponsor does not suffice as documented evidence.) In such cases the indirect cost rate will be applied to total direct costs (TDC) rather than modified total direct costs (MTDC) unless otherwise specified. If the rate is not supported by a published policy or in written guidelines, UofL's full indirect cost rate must be applied. When in doubt, contact your respective sponsored programs representative.

When to Use Which Rate

The following guidelines may help you in determining the appropriate indirect cost rate to be applied to a sponsored project. As always, please feel free to contact your sponsored programs representative for assistance.

The University of Louisville has adopted the following definition from the National Institutes of Health for a clinical trial:

Research study in which one or more human subjects are prospectively assigned to one or more interventions (which may include placebo or other control) to evaluate the effects of those interventions on health-related biomedical or behavioral outcomes.

In comparison, UofL considers the following to define clinical research:

How Are Indirect Cost Rates Determined?

The federal government recognizes that it is not possible to accurately capture all costs of an organization that are allocable to a particular sponsored project. Federal guidelines define a process for grouping costs into specified cost pools, which are then distributed to appropriate activities in a cost allocation process. Once the cost allocations are made, negotiations take place between the university and its cognizant agency to negotiate the indirect cost rates. Rates cover organized research, instruction, and other sponsored activities.

How Are Indirect Cost Rates Applied?

Federally negotiated indirect cost rates are applied to modified total direct costs (MTDC). Modified total direct costs exclude equipment, capital expenditures, charges for patient care and tuition remission, rental costs, scholarships and fellowships, as well as the portion of each subaward in excess of $25,000. At UofL, equipment is defined as tangible personal property (including information technology systems) having an acquisition cost of $5,000 or more and a useful life of more than one year (see UofL's rate agreement for additional details). Please note that on project budgets that include indirect rates other than our federally negotiated rates, the rate is generally applied against total direct costs (TDC).

How Are Recovered Indirect Costs Distributed at the University of Louisville?

What Are the Current Indirect Cost Rates at UofL?

Only in exceptional circumstances are reductions in the negotiated indirect cost rate considered. For additional guidance see the F&A Reduction/Cost-Burdening Request Form.