Kristi fondly flashes back to her four-year-old self, sitting in stands at Papa Johns Cardinal Stadium during one of the many UofL football games her family has faithfully attended since she was a child (and before, her dad and grandfather’s are former UofL football players). It was a homecoming game, and the king and queen were being crowned on the field. “I want to go on the field! How can I be out there?” she questioned her mom? Mrs. Knop explained to her young daughter that Kristi would have to go through school, get accepted into college, choose to attend UofL, and become involved on campus. 17 short years later, that dream is a stunning reality for senior nursing student, Kristi Knop.

Fast forward to October 18, 2014, and Kristi kept warm with a big red and black scarf paired with her dress and heels, standing the Louisville Cardinal’s football field during halftime of the N.C. State game as her name was called over the PA system, crowning her as Homecoming Queen. So what happened in between, that led the 4-year-old dreamer to her senior year at the University of Louisville?

“I grew up in Louisville and went to Sacred Heart. My dad and grandfather’s went to UofL and played football. I always wanted to go to UofL.” Kristi recounts her college decision process as a highschooler at Sacred Heart. “At one point, my friends [and I] were all saying, ‘let’s get away, let’s go away for college.’

“But then it kinda of hit me, why would I go anywhere but UofL?”

“I came to Accolade and thought, this place isawesome.” The rest is history. Kristi is a great ambassador for the school, constantly praising the diverse culture of the city surrounding the university, along with her constant appreciation for the “family” like culture UofL exudes.

“Freshman Orientation makes a big difference. It creates that big family feel at UofL, from the very start.” Knop went on to be selected as an SOSer, student orientation leader, the summer before her senior year. SOSer’s spend the entire spring before summer Orientation preparing to welcome the new freshman, and then live on campus all summer, leading incoming freshman in 10 Orientation sessions throughout the summer.

At UofL, you’re not just a number. You just have to reach out a little bit, meet UofL halfway, and the university makes you feel so special. As an SOSer, I’ve had freshman come back and tell me “We felt like Louisville was our home after Orientation, not just another new freshman.”

When asked her favorite thing about Louisville as a city, Knop couldn’t single out just one thing.

“The city - I am obsessed with Louisville! Hook-line-sinker.”

“There are so many things [Louisville] offers. It’s so diverse. These days, colleges are trying to sell diversity; UofL doesn’t have to. It’s a fun, diverse city; you can be downtown, in the suburbs, NuLu (New Louisville), and then out in the country, all within miles.”

In addition to being an SOSer her senior year, Kristi will graduate with her nursing degree in Spring 2015. Knop is also a member of Chi-Omega, serving as the sisterhood chair. The Chi-O house on campus is one of her favorite spots at UofL. “It’s my home [for the past 3 years], I have so many fun memories there. I also love the Stansbury fountains – sometimes I run though there when I’m on a run. It’s beautiful!”

“ The city - I am obsessed with Louisville! ”

In a fairy-tale sort of storybook ending, Kristi will treasure her experience as a UofL undergrad student, perfectly capped off with a walk across the field that brisk October evening as the 2014 Homecoming queen. She hopes to remain in her favorite city, Louisville, after graduation, to pursue her nursing career.

“The feelings and culture surrounding UofL have been progressing and changing even since I started here [at UofL]. It’s such an a good college experience.” 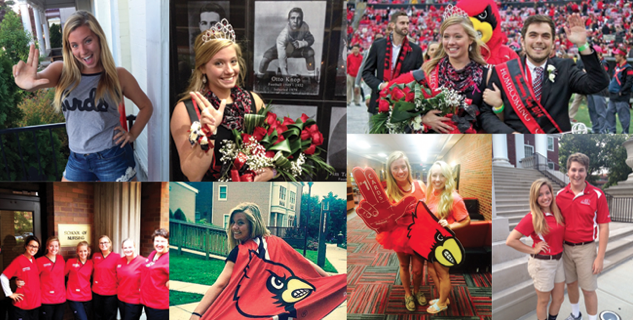