(May 28, 2013) LOUISVILLE, Ky. - Junior McConnell Scholar Benjamin Whitlock has been selected for a year-long national program focused on education advocacy. 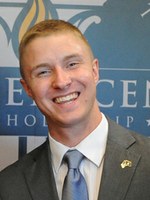 Benjamin Whitlock, a junior McConnell Scholar at the University of Louisville, is one of only 30 students nationwide selected for the GEAR UP Alumni Leadership Academy. Participants will gather in Washington, DC, on June 22 for a week of training on education advocacy, peer outreach, social media activism and public speaking.

GEAR UP, which stands for “Gaining Early Awareness and Readiness for Undergraduate Programs,” is part of a federal government program that provides six-year grants to states and partners to help increase the number of low-income students who pursue post-secondary education.

Whitlock, a GEAR UP alumnus, and other alumni leaders will work for one year exploring education advocacy and leadership. According to GUALA’s website, “Alumni Leaders will also articulate how the federal investment in them–an average of $2,400 per student or $400 per year over 6 years–will be returned to the community over the student’s lifetime by earning a livable wage, paying increased taxes, strengthened citizen engagement, and better public health.”

When he is not in DC this summer, Whitlock will be continuing his work as an interpretive ranger at the Abraham Lincoln Birthplace National Historic Park in Hodgenville, Ky., where he will lead group and youth tours and present historical programs. He will also work this summer to train other rangers about “Leave No Trace,” a program that educates the public on how to enjoy the outdoors without harming the environment.

Whitlock, a native of Green County, Ky., is pursuing a major in history and minor in political science at the University of Louisville. In addition to chairing community service at the McConnell Center, Whitlock volunteers with the Boy Scouts of America.