(Dec. 16, 2014) LOUISVILLE, Ky. — Samantha Power, U.S. ambassador to the United Nations, will speak at the University of Louisville Jan. 12 as a guest of the university’s McConnell Center. 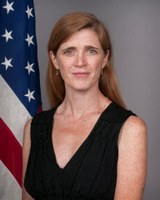 Power, a member of President Barack Obama’s cabinet, has been in her U.N. role since August 2013. She previously served as special assistant to the president and senior director for multilateral affairs and human rights on the White House National Security Council staff.

She was the founding executive director of the Carr Center for Human Rights Policy at Harvard University, where she was the Anna Lindh professor of the practice of global leadership and public policy for the John F. Kennedy School of Government.

Power won a 2003 Pulitzer Prize for her book “A Problem from Hell: America and the Age of Genocide.” She also wrote “Chasing the Flame: Sergio Vieira de Mello and the Fight to Save the World” and co-edited “The Unquiet American: Richard Holbrooke in the World” and “Realizing Human Rights: Moving from Inspiration to Impact.”

Tickets for Power’s talk are required and available online.

She is a former journalist who reported from around the world and regularly contributed to the The Atlantic Monthly, The New Republic and The New Yorker.

Power immigrated to the United States from Ireland when she was 9. She earned her bachelor’s degree from Yale University and law degree from Harvard.