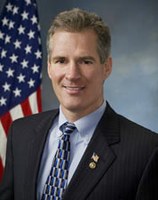 "On January 19, a little known state senator stunned the political world by winning the U.S. Senate seat previously held by 'The Lion of the Left,' the late Senator Ted Kennedy. Some considered Brown's election a fluke, while others read it as a harbinger of a wave election that would reset the political environment of Washington, D.C.," said Dr. Gary Gregg, director of the McConnell Center. "We welcome Senator Brown to the McConnell Center to discuss his election, recent developments in Washington, D.C., and the future of American politics after the 2010 midterm elections."

Due to high demand, tickets are no longer available. Please check our web site at 1:30 p.m., Nov. 8, for live stream coverage of the event.

Scott Brown, 51, is a Massachusetts Republican elected to fill the U.S. Senate term vacated by the death of Ted Kennedy.

Brown is the first Massachusetts Republican to serve in U.S. Congress since 1997. He won a landslide victory in last year’s GOP primary for Kennedy’s Senate seat and defeated Massachusetts’ attorney general in the general election.

Brown serves on the Senate’s Armed Services, Veterans’ Affairs, Homeland Security and Governmental Affairs committees. A member of the Massachusetts National Guard for 30 years, he received an Army meritorious service medal for supporting homeland security after the Sept. 11, 2001, terrorist attacks.

He entered politics in 1992 when he was elected property assessor in Wrentham, Mass., later serving three terms each in the Massachusetts House and Senate.

In 1982, he won Cosmopolitan’s “America’s Sexiest Man” contest, posing for a centerfold in the magazine and launching a part-time modeling career during the 1980s.