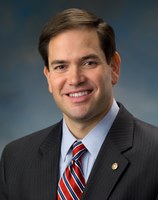 Tickets for his talk are free and can be requested below.

Marco Rubio, a Republican U.S. senator from Florida, will speak to students and community members March 25 at the University of Louisville.

His free, public talk through the McConnell Center is scheduled to begin at 4 p.m. in Bigelow Hall, Miller Information Technology Center, on UofL’s Belknap Campus.

Tickets for the McConnell Center event are free but must be requested online. Tickets are non-transferable and are distributed on a first-come, first-served basis.

On Feb. 12, Rubio, a Miami native, gave the GOP response to President Obama’s State of the Union address, marking the first time the response was delivered in English and Spanish.

Elected to the Senate in 2010, Rubio serves on four Senate committees: Commerce, Science and Transportation; Foreign Relations; Intelligence; and Small Business and Entrepreneurship.

From 2000 to 2008, he represented the 111th District in the Florida House of Representatives, becoming the state’s first Cuban-American house speaker. While a representative, he wrote a book, “100 Innovative Ideas for Florida’s Future,” which he compiled after traveling the state and talking to citizens.

In the late 1990s, he was a West Miami city commissioner.

His autobiography, “An American Son: A Memoir,” was published in June.