(Feb. 15, 2012) LOUISVILLE, Ky. - Leon Panetta, Secretary of the U.S. Department of Defense, will speak March 1 at the University of Louisville's Cardinal Arena. 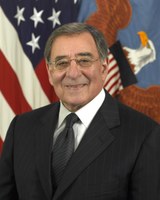 His free, public talk through the McConnell Center is scheduled to begin at 7:15 p.m., March 1, in Cardinal Arena on UofL’s Belknap Campus. Tickets must be requested online.

Panetta, appointed by President Obama in April to lead the nation’s defense cabinet, had served as U.S. Central Intelligence Agency director since 2009. He was President Clinton’s White House chief of staff from 1994 to 1997 after serving a two-year stint as director of the Office of Management and Budget.

From 1977 to 1993, he represented California’s 16th Congressional District in the U.S. House of Representatives, rising to House Budget Committee chairman in his final four years in Congress.

A Monterey, Calif., native born to Italian immigrant parents, Panetta holds a bachelor’s degree in political science and a law degree, both from Santa Clara University.

Tickets are free and must be requested online.

In 1998, he and his wife founded the Leon & Sylvia Panetta Institute for Public Policy at California State University, Monterey Bay, a nonpartisan, not-for-profit center that helps prepare students for public service careers.

Among Panetta’s many awards are an Army Commendation Medal, the Peter Burnett Award for Distinguished Public Service, the Paul Peck Award and honorary doctoral degrees from University of Wisconsin-Parkside and Northeastern University.