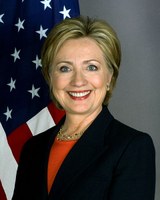 UofL received word from the State Department April 7 that Secretary Clinton's April 9 talk will begin at 3:30 p.m. rather than the previously posted 2:45 p.m. The talk is part of the McConnell Center's spring lecture series.

Due to high demand, tickets are no longer available. Please check our web site beginning at 3 p.m., April 9, for live coverage of the event.