Sept. 24, 2012 - by Janene Zaccone, University of Louisville Communications and Marketing 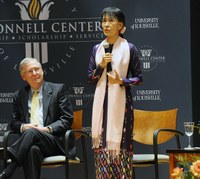 Her visit, as guest of the McConnell Center at UofL, is one stop on a 17-day U.S. tour that started with a visit to Washington to receive a Congressional Gold Medal she won in 2008.

For 15 of the 20 years between 1990 and 2010, she was under house arrest for opposing the military rule of her homeland. She was released in November 2010 and earlier this year was sworn in as a member of Parliament.

“It is impossible today … not to be moved by the thought that this, most unlikely of revolutionaries, may yet witness the deepest longing of her heart — a representative, democratic system in which the people of Burma are finally able to fully enjoy their God-given rights.”

Suu Kyi spoke to more than 500 people in Comstock Concert Hall. Her remarks lasted just a few minutes and started with her thanking McConnell for his “consistent support.”

“I’ve come here to thank him and to thank all of you who have stood by our cause,” she said.

Although Myanmar (also known as Burma) is moving toward a more democratic process and has a president who is reform-minded, she said there still is work to be done.

“Please continue to keep your eyes on my country, to find out what’s going on and to view things with what I call cautious optimism. … You must be very careful what you accept as genuine progress and genuine moves to a true democratization,” she said.

“A genuine democracy depends on the people feeling that they are part of the process of government, and to get there, we still have a lot to do.”

Suu Kyi took audience questions for more than a half hour. People asked such questions as whether she supports the lifting of economic sanctions other countries have imposed because of human rights violations, and to explain how nonviolence, an approach she has taken in her opposition to non-democratic rule in Burma, shapes her life.

Suu Kyi said she supports lifting or relaxing sanctions because “I think it is time that we of our country start carrying on the process of democratization. Sanctions have been a great help to us…but I know that there are still human rights violations in Burma. There are human rights violations in countries all over the world. … In the end, it’s we who live in the country who must make sure that these violations come to an end. …”

Answering a question on what people in the United States can learn about democracy from Burma, she said she worries sometimes that people in the west take their rights for granted. “So what you should learn from us is how valuable your democratic rights are and that together with those rights you have the responsibility to try to preserve them.”

And she said that nonviolence “frees up a lot of your heart. You have to win over your enemies … you have to learn about reconciliation, to listen to the other side, to learn to understand them.”

“Nonviolence is a good way of making yourself a better person,” she said.

“This young man has asked what they can do to help us,” she explained after answering the second question. “I find it encouraging that they are thinking of us despite the time they spent in refugee camps.”

The intimacy and informality of the question-and-answer part of the talk impressed student Jake Thomas, a philosophy and history major from Cadiz, Ky. He said he was particularly struck by Suu Kyi’s response to her fellow Burmese and that “it was interesting to hear her perspectives.”

“It was great,” Thomas said.