(April 18, 2011) LOUISVILLE, Ky. - Trisha Maclin, a senior McConnell Scholar majoring in English and political science at the University of Louisville, was chosen by the traditional spin of the wheel April 15 at the 53rd annual Fillies Derby Ball. 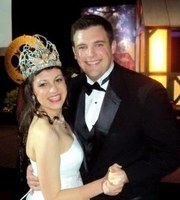 Members of the Royal Court were selected from more than 100 women who applied last fall. They have represented the Derby Festival at a variety of local events since selection in January.

Criteria for selection included knowledge of the Derby Festival, poise, intelligence, personality and campus and community involvement. Each woman receives two $1,000 scholarships — one from The Fillies Inc. and one from the Kentucky Derby Festival Foundation — and a wardrobe from Fashion Bug and Regiss Bridal & Prom.

Past Derby Festival Queens include Martha Layne Collins, Kentucky's first female governor, and Gail Gorski, the first female pilot for United Airlines, and a number of other community leaders.