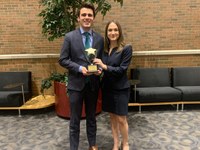 All six came back with trophies, including the overall first-place team finish at the Nov. 22 and 23 regional moot court competition.

“It’s been four years of consistent hard work, but we’ve never quite finished in the top at Regionals," Noble said. "To finally see all of that work accumulate in this victory is a testament to this program and the process that our coaches put us through. It shows how effective this program is terms of setting us up for success at the national stage.”

The regional competition was an American Moot Court Association national qualifier, and Kolyaskina and Noble will travel to Baton Rouge in January for their fourth national appearance. The country’s top 80 qualifying teams are invited to national competition.

Last year, Noble was ranked the sixth individual orator in the nation, while Kolyaskina was ranked seventh.

The other two McConnell Center teams – Will Randolph (’22)/Alli Wade (’22) and Eric Bush (’20)/Austin Dillon (’22) – finished among the top ten teams at this year's regional competition.

Practicing between six and ten hours each week this semester, competitors worked in pairs to prepare remarks and apply legal concepts to a fictitious appellate case. This year's case considered how constitutional amendments relate to unreasonable search and seizure, hearsay, and human trafficking.

“Our immense preparation and study of case law through moot court has been invaluable in helping supplement my studies in criminal justice here at UofL,” Wade said.

The team is coached by Sean Williamson, a 2011 graduate of the McConnell Scholars Program and a senior associate at Wyatt Tarrant & Combs LLP.