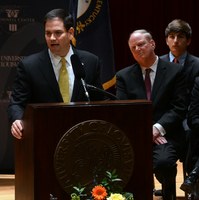 Will the United States continue to be an example to the world of what can happen when people have the freedom to go as far as their work ethic and talent can take them and if so, what is government’s role?

U.S. Sen. Marco Rubio tackled that question in a talk at the University of Louisville March 25. The junior Republican senator described the American dream, personalizing it with the story of his family—parents exiled from Cuba who instilled in their children a belief that they could become whatever they wanted to be through hard work. He outlined ways he thinks the government can create conditions of growth that assure the country has “an exceptional and vibrant middle class” that will allow it to maintain its “unique place” in the world.

Rubio also noted that government regulations of business should be a result of cost-benefit analysis, that the tax code is a barrier to business investment in the global marketplace and that fiscal discipline combined with robust economic growth are the only way to answer the debt problem.

The senator was the guest of the McConnell Center.