(Oct. 31, 2011) LOUISVILLE, Ky. - America’s political leaders need to “recognize that common ground and compromise are not the same things” and work together to address the economic and other challenges that the United States faces. 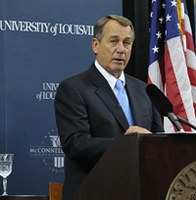 “Faith in our government has never been high but it doesn’t need to be this low….The American people need to see that, despite our differences, we can get things done,” said U.S. Speaker of the House John Boehner at the University of Louisville Oct. 31.

Boehner was at UofL as a guest of the McConnell Center, which in the past two years also has brought U.S. Sen. John McCain, Secretary of State Hillary Clinton and Vice President Joe Biden to campus.

“Common ground and compromise are commonly and mistakenly equated with each other in our political discourse these days,” Boehner told several hundred people who came to hear him on Belknap Campus. “I think the mistake is made by individuals on both sides of the ideological spectrum. … I do believe there is a significant difference. There’s no question that American people want elected leaders who will stand on principle and stick to those principles. They want leaders who will do what they say they’ll do, who will keep their promises and fight for them.

Boehner said that when elected officials from both parties misunderstand the distinction and fail to look for the common ground because they think they will violate their principles, the lack of action further erodes public confidence in elected officials and government.

He talked about times that Democrats and Republicans have reached common ground, such as the recent free trade agreement and repeal of a 3 percent tax on small businesses, both of which he said will create jobs.

The American people want more of it, Boehner said, and he gave examples of three bipartisan bills he thinks will provide opportunities for legislators to find common ground: Reducing Regulatory Burdens Act, which pertains to pesticide permits; Cement Sector Regulatory Act, which concerns cement plant emissions; and the EPA Regulatory Relief Act, which deals with emission guidelines for boilers and incinerators.

Throughout his talk, the Republican from Ohio reminded people of his roots as a small-business man and of his stance on government spending and regulations.

“I gave a speech last month at the Economic Club of Washington. I talked about the need for us to liberate our economy from the shackles of government. As a guy who ran a small business, I certainly believe that until we get away from a government that’s constantly meddling, manipulating and micro-managing our economy, we won’t see lasting job growth in our country.

“Now I realize that President Obama and Vice President Biden are probably never going to agree with that statement. It’s probably going to take a different administration to do the things that I truly think are needed to turn our economy around,” Boehner said, “but that does not absolve us from our obligation to work together to do what we can do now.”

The same kind of bipartisan effort as that seen in enactment of the 1996 welfare reform law—when a Republican Congress passed the bill under Democratic President Bill Clinton—will lead to success on jobs and the national debt, he said.

“I didn’t take this job to preside over some partisan screaming match,” Boehner said. “I took this job so we could listen to the people of this country and get the job done.”

The night before his public talk, Boehner met privately with McConnell scholars.

“I don’t think he’s a politician at heart. He was just the person chosen to do a job and he’s doing the best he can,” noted McConnell Scholar Evan Shepherd.

Boehner echoed that thought in his formal talk.