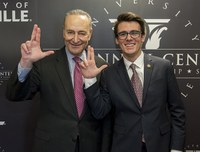 Noble (’20) earned a $4,000 stipend from the Washington Society of Kentucky to help defray transportation and living expenses for the internship. He is one of three interns to participate in the society’s Henry Clay Summer Internship Program.

“I’m so glad to receive the award and to be able to work for Senate Leadership at a time like this,” Noble said. “What a unique opportunity to see how the Democratic Party handles themselves in a relatively tumultuous time in government.”

As a Clay Intern, Noble will have access to DC mentorship opportunities, networking events, and will participate in the Kentucky Society’s Biennial Henry Clay Distinguished Kentuckian Award Dinner Gala.

Noble learned he received a placement with Schumer’s office when Schumer visited the McConnell Center and announced it during his speech earlier this year in February.

“I first thought he was talking about another McConnell Scholar who interned for him. I didn’t realize he was announcing my internship–I kind of blacked out when that happened,” Noble said.

This spring, Noble interned in Frankfort with Tom Burch (D-Louisville), the longest-serving Kentucky representative in history.

“I look forward to comparing how my state-level internship stacks up with the federal level,” Noble said.

Noble, who will graduate from the University of Louisville during a presidential election year, said he is interested in political campaigning before he heads to law school. He is majoring in political science and history at UofL.

For the past two years, he has been a national competitor with the McConnell Center’s moot court team. He also served as the deputy chief of staff for the student government association.