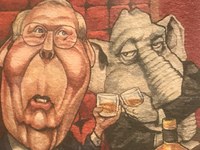 The most popular attraction in the new exhibit is the section that focuses on how Senator McConnell has been spoofed by the media during his 40-year political career.

The Civic Education Gallery of the McConnell-Chao Archives, designed to educate visitors about American government, history and politics, has a new exhibit. The addition contains a panel that includes a timeline of U.S. Senator Mitch McConnell’s political career, culminating with his election as Senate Majority Leader.
But according to Deborah Skaggs Speth, curator and archivist of the McConnell-Chao Archives, the most popular attraction in the new exhibit is the section that focuses on how McConnell has been spoofed by the media during his 40-year political career.
“People don’t know this, but he’s really got a great sense of humor,” Skaggs said. “One entire wall of his Senate office is filled with political cartoons that have poked fun at him over the years. He thinks they’re very funny and wanted to include them in the exhibit. People don’t see that side of him all that often, which is why we wanted to include them – for people to know that he can laugh at himself.”
The exhibit also includes a clip of McConnell being spoofed on Saturday Night Live in which he and former President Barack Obama held a “Bourbon Summit” at the White House.
The archives are located in the basement of Ekstrom Library and are open to the public during the library’s normal business hours. Admission is free and guided tours are available.
For more information, contact Speth via email or at 502-852-7964.
Contact