(April 11, 2011) LOUISVILLE, Ky. - McConnell Scholars present the memorial award to Joe Dablow, the director of planning and operations in Undergraduate Affairs and Enrollment Management at the University of Louisville and a lieutenant commander in the U.S. Navy. 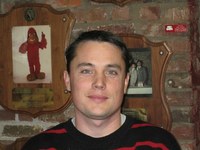 In all that he has done at the university — and for his country, Joe Dablow's central concern and chief satisfaction have been at every opportunity to support, guide and encourage individual students and colleagues. For these reasons, McConnell Scholars chose to award him the 2011 Chris Mattingly Award for Outstanding Leadership, said senior scholar Andrew Carroll. As Dablow is currently overseas serving a year-long tour with the U.S. Navy, Carroll presented the award to Dablow's wife and brother April 8.

Watch a video of Dablow accepting the award from Iraq

Dablow, native of New Albany, led a university task force to establish the Office of Military and Veteran Student Services, which opened under his supervision in January 2010, and he has been active in recruiting, advising and supporting US active-duty and veteran personnel who come to the university during or after their service. He is also program director for the Brown Fellows and the Jones Scholars, prize scholarship programs in the Office of the University Provost.

Dablow graduated in May 2000 from Purdue University School of Engineering. Upon graduation, he began four years of active-duty service as an officer in the US Navy. He served as instructor, adviser, command duty officer and class director in the Nuclear Power School, Charleston, SC, training the officers and enlisted personnel who operate the nuclear propulsion systems of US Navy submarines and aircraft carriers. After his active-duty tour, he remained in the Navy Reserve in intelligence units in Atlanta, GA, and Huntsville, AL. In December 2010, he began a year’s active-duty tour as USN lieutenant commander attached to a joint-services unit in Iraq.

About the Chris Mattingly Award for Outstanding Leadership in Kentucky

The Chris Mattingly Award for Outstanding Leadership in Kentucky was established to honor the memory of one of the first McConnell Scholars. Chris Mattingly, 21, died as a result of a car accident on Nov. 1, 1996. He had completed 104 hours towards a Bachelor of Arts degree in Political Science at the University of Louisville and was a member of the first McConnell Scholars Leadership Council.

The Chris Mattingly Award was first presented in 1998 and is given annually at the McConnell Scholar Senior Dinner to an individual who reflects exceptional character and leadership benefitting the Commonwealth of Kentucky. McConnell Scholars vote on this award.