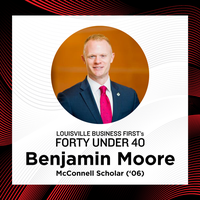 Benjamin Moore, a 2006 graduate of the McConnell Scholars Program, has been named to Louisville Business First's "Forty Under 40" list.

The list is an annual, competitive program honoring the region's up-and-coming young leaders in the Greater Louisville/Southern Indiana area. More than 600 nominees were considered this year.

As deputy director of Louisville Metro's Department of Economic Development, Moore develops departmental strategies and works to maximize the utilization of department services for Louisville's business community. He previously served as vice president of strategic alliances with the Louisville Healthcare CEO Council.

After earning his undergraduate degree in political science and urban geography from the University of Louisville, Moore worked with Leadership Louisville Center to help attract, recruit and retain companies and their employees in the region. He went on to earn his master's degree in urban planning from UofL in 2009 and worked with Norton Healthcare for seven years before moving into the economic development sector.

Moore is one of 11 UofL alumni nominees in Louisville Business First's 2021 "Forty Under 40" list.

McConnell Scholar alumni are encouraged to update their professional profile with the McConnell Center. Please email Sherry Allen with updates.