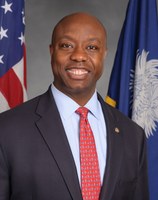 Tim Scott, a conservative Republican U.S. senator from South Carolina, will speak Nov. 16 at the University of Louisville through the McConnell Center’s Distinguished Lecture Series. Tickets are free and required.

The free, public talk through the McConnell Center is scheduled to begin at 10 a.m. in Bigelow Hall, located in the Miller Information Technology Center on UofL’s Belknap Campus.

Scott, 50, was appointed in 2013 to fill a vacant Senate seat in South Carolina and regained the seat last year in a special election. He sits on four Senate committees – Commerce, Science and Transportation; Energy and Natural Resources; Health, Education, Labor and Pensions; and Small Business and Entrepreneurship.

A Charleston, S.C.-native who has worked in the insurance and real estate industries, Scott favors repeal of the Affordable Health Care Act, supports a constitutional amendment to balance the federal budget and is a staunch advocate of his state’s Right-to-Work laws.