Cameron to be UofL commencement speaker 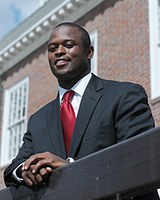 Daniel Cameron made the most of his time at the University of Louisville.

As an undergraduate, he played for the 2007 Orange Bowl-winning football team and was a McConnell Scholar. After earning his bachelor’s degree in political science in 2008, the Elizabethtown native enrolled at the Brandeis School of Law. During his time there, he published a paper in the University of Louisville Law Review; served as a member of the 2010 NCAA Rules Subcommittee at UofL, McConnell Alumni Council, School of Law Moot Court Board and Brandeis Inn of Court, and co-chaired the 2011 National Trial Competition Regional Committee. In his third and final year, he served as the president of the Student Bar Association.

I decided to come to UofL for undergrad for a couple of reasons, football being one. But the main reason is that I wanted to part be of the McConnell Scholars program.
— Daniel Cameron

As one of two of this year’s outstanding graduates, Cameron will speak at the morning commencement ceremony May 14 at the KFC YUM! Center.

UofL Today caught up with him recently to talk about his time at UofL and his future plans.

Why did you decide to attend UofL?

I decided to come to UofL for undergrad for a couple of reasons, football being one. But the main reason is that I wanted to part be of the McConnell Scholars program. I continued here in law school because of a conversation I had with a friend of mine who told me, ‘if you want to be here in the state and do good things in the state, then you should go to one of the state law schools.’ It came down to UK and UofL. And at the end of the day, my love for UofL and the scholarship that they were able to give me swayed me to stay here.

You were involved in a lot of activities while at UofL. What made you want to pursue so many different things?

In high school, I was involved in a lot of things, whether it was Beta Club or sports. I thought that, if given the chance to do those things in college, I would certainly continue to try to do those things. I was blessed that I was able to do both (sports and academics) at the University of Louisville. That’s one of the great things about the university. They give you so many opportunities to do great things. The slogan is ‘It’s happening here,’ and that’s right. That sums it well. If you want to be involved, you can be involved here. The doors were open that allowed me to do those things, and I walked through.

What did you gain from those experiences?

I think the biggest thing I gained was the opportunity to meet a lot of different people — to walk in different shoes, to gain a different perspective — whether as a student athlete or as part of a scholarship program. Here at UofL, you’ll find a lot of diversity, not only in terms of the color or one’s skin, but also in terms of someone’s thought. You get to sit down with people that might not think the same way as you do.

What has been your favorite experience as a UofL student?

In undergrad, my favorite experience was being a part of the Orange Bowl team that won in 2007. Another big experience was being able to go to China as a part of the McConnell Scholars program. I had never traveled abroad before and I was given the opportunity to do that. China is a fascinating place. We got to study with the students there in Beijing and then we got to do some sightseeing, which was a really phenomenal experience. While in law school, the most rewarding experience has been being student body president. Not because of the title or anything like that, but because day-in, day-out, you always run into some issue that outside of that position, you probably wouldn’t run into. It’s interesting to see what concerns students have and how as student body president, you have to respond to those things. Being able to help people in that position has been very rewarding, and I’m thankful I got the opportunity to do it.

What’s next for you after commencement?

I accepted a federal clerkship with Judge Van Tatenhove, United States Eastern District Judge. It’ll be an interesting experience. To work for a judge as a clerk is another way to continue your education in legal writing and critical thinking. Those are things you’ll do on a regular basis. The judge, at the end of the day, is going to lean on you for writing memorandums or bringing legal thoughts to the table. That’s what’s next for me. I’ll do that for one or two years. After that, we’ll see what’s next. But I do plan to come back to Louisville and try to do some good work here.

What do you plan to tell your peers in you commencement speech?

I’ve given a little thought to it. The biggest thing I want to say to them is that we’ve all had different experiences. Some of us have worked while going to school. Some of us have been in the honors program or scholarship programs. Some of us finished in three or four years; some of us in six or seven. But on graduation day, we’ve all ended in the same place. The question really now is what to do with the knowledge and skills that we gained while in college. There’s a term that’s often thrown around — the best and brightest — and trying to keep the best and brightest in the state. At the University of Louisville, those that are graduating and those are still studying are the best and brightest. The question is — what will we do with those talents and those skills? Some will go to grad schools. Some will go to the workforce. Some will go overseas with Fulbright awards and things like that. That’s the question. Do you settle for mediocrity? No. Do you try to rise to the occasion every time? Yes.

5.7 The Roots of American Order | The Protestant Reformation with Dr. Glenn Moots
Feb 01, 2022