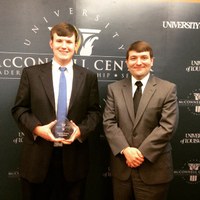 McConnell Scholar Robert Gassman (’18) was named the champion of the McConnell Scholars Program Debate Society on April 16. Gassman debated topics such as U.S. sanctions against Iran, Indiana's religion freedom law and the merits of co-ed classrooms as part of the multiple-round tournament.

"I really enjoyed learning the debate process and growing my oratory skills this semester. We had a great group participate this year, and I can't wait to be back and debating next season!" said Gassman.

The winner was determined through a tournament-style competition at the end of the semester-long program.