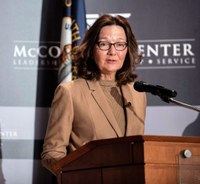 CIA Director Gina Haspel told a UofL audience on Monday that the Agency “doesn’t do easy” and that its priorities include a robust overseas presence, greater focus on nation-state adversaries, investing in foreign language excellence and fostering an environment of inclusiveness and diversity.

Haspel’s remarks were part of her visit to the university as a McConnell Center Distinguished Speaker. She is the second CIA Director to appear as a guest of the Center, following David Petraeus, who came to campus in 2012.

“It’s a rare pleasure to be back home in Kentucky and back on this campus,” said Haspel, a 1978 UofL graduate and the first woman to head the CIA. About 400 people heard Haspel speak and outline priorities for the Agency.

One of those priorities is to foster strong partnerships between the CIA and other government agencies, as well as with foreign allies.

“Teamwork is the only effective way of dealing with the range of complex threats we face across the globe,” she said. “The CIA is working more closely than ever with our allies across the world.”

She also spoke about the seriousness of the opioid crisis and said the CIA plans to make a bigger investment in counter narcotics efforts.

“No foreign challenge has had a more direct and devastating impact on American families and communities, including right here in Kentucky, than the flow of opioids and other drugs into our country,” Haspel said. “This terrible threat has killed far more Americans than any terrorist group.”

In her Q&A with Jennings, Haspel talked about careers in the CIA.

“We are looking for people who are dedicated to serving their country,” Haspel said.

“It’s not only the things you see in movies,” Haspel said. “We also have lots of other occupations that you find at any large organization. We have accountants, we have lawyers, we have scientists, engineers, data scientists and cyber experts.

“CIA can offer a rewarding career in a lot of different fields. Prepare yourself with a good education and raise your hand for the difficult jobs,” she said.