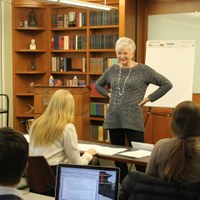 Deborah Skaggs Speth, archivist for the U.S. Senator Mitch McConnell and Elaine L. Chao Archives, has been appointed to the Advisory Committee on the Records of Congress. The committee advises Congress and the Archivist of the United States on the management and preservation of congressional records.

Skaggs Speth has worked at the University of Louisville for 17 years and is celebrating her 40th year as an archivist. Her experience as an archivist spans university, state government, private sector and consulting sectors.

"I am very excited to be appointed to this committee, because I have kept up with their business since I have been here in the archives for six years now," Skaggs Speth said. "It's a true honor."

Skaggs Speth holds a B.A. and M.A. in history from UofL. She first worked as an archivist at UofL under Dr. William J. Morison for 11 years before taking a position at the Alabama Department of Archives and History.

She is a founding member of the Kentucky Council on Archives and was the Vice President of the Academy of Certified Archivists. She was also the first woman to serve as an officer of the National Association of Government Archivists and Records Administration.

In 2001, Skaggs Speth was elected a Fellow of the Society of American Archivists, the highest honor bestowed on individuals by SAA for outstanding contributions to the archival profession.