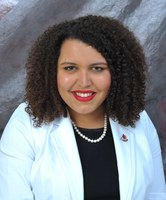 The John Lewis Fellowship, hosted by Humanity in Action and The National Center for Civil and Human Rights Inc., was awarded to just 30 college students and recent graduates from around the globe.

Allen, a history and political science double major, will take part in daily lectures and discussions with renowned academics, politicians and activists. The July 5-Aug. 1 program in Atlanta is for scholars interested in history, diversity and civil rights. Scholars were selected for the fellowship based on academic standing, civic leadership and recommendations.

“Receiving the Lewis Fellowship is the first concrete step toward my personal and professional future,” said Allen. “The academic aspect of discussing diversity and minority rights in the United States will be critical to my future in law and as an advocate for social justice.”

Allen is president of UofL’s Student Government Association, a Woodford R. Porter scholar, a McConnell Scholar and has earned other academic and professional accolades, including being selected as a national campaign ambassador for Harvard’s Institute of Politics.

She is a 2012 graduate of Bowling Green High School and the daughter of Jennifer Allen of Auburn, Ky.