(July 17, 2014) LOUISVILLE, Ky. – Thirty U.S. Army soldiers stationed around the world converged at the University of Louisville’s McConnell Center during the month of June to enhance and broaden their strategic thinking and leadership skills. 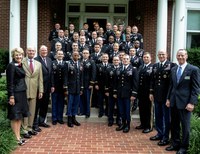 McConnell Center Director Gary Gregg, PhD, designed the strategic broadening seminar (SBS) course to “widen soldiers’ apertures” and drew on expertise in the university’s faculty in political science, history, Chinese studies and Asian democracy programs, as well as guest speakers from the US Air Force, Marine Corps and military and academic institutions across the nation.

“It was our goal to educate, energize and inspire these outstanding public servants and soldiers to think strategically and introduce them to academic pursuits they may not have dealt with in years – if at all,” Gregg said. “The feedback has been overwhelmingly positive, and it was an honor for us to have been entrusted to become a key strategic partner to help the US Army educate its next generation of great officers.”

During half of the course, officers drew on lessons from Thucydides, Cicero, Marcus Aurelius, Plato, Machiavelli, Sun Tzu, the Federalist papers, the U.S. Constitution, Alexis de Tocqueville, Mission Command leadership philosophy and H.R. McMaster’s “Dereliction of Duty” to discuss strengths and weaknesses, as well as obstacles and challenges, related to the past, present and future of democracy in America.

“My patriotism was enhanced during my reading of the Federalist papers and the Constitution,” said U.S. Army Capt. Trivius Caldwell, infantry company commander of the 82nd Airborne Division based out of Ft. Bragg, N.C. “The discussions regarding ethics and justice through a study of Plato’s Republic allowed me to thoroughly examine my personal and leadership actions and the depth from which they are cultivated. This is essential, but often neglected, form of reflection.”

During the second half of the course, officers worked with material experts to consider China’s increasingly regional, political, economic and resource-driven assertiveness in Northeast, Southeast and Central Asia.

Applying concepts learned in the course to current US challenges across the globe, officers also worked with mentor faculty to present a culminating, research-driven project. Topic presentations were based on the army’s Key Strategic Issue List (KSIL) and included mission command and leadership philosophy in the army and challenges of China in Northeast Asia, Southeast Asia and in Central and Latin America. Teams were granted latitude to collectively identify a problem, choose an appropriate analytical framework, develop a course of action and recommend appropriate military strategies. Officers presented research papers and 30-minute briefings to Brig. Gen. David MacEwan, the 59th Adjutant General of the U.S. Army.

Soldiers also had the opportunity to discuss leadership goals and challenges with national, state and local leaders, including US Sen. Mitch McConnell, Kentucky Lt. Gov. Jerry Abramson and UofL president James Ramsey and head baseball coach Dan McDonnell, as well as other city and university leaders.

When they weren’t in the classroom, officers took advantage of UofL and city amenities, enjoying Louisville landmarks such as the Frazier International History Museum, “Downs after Dark” at Churchill Downs, UofL and Louisville Bats baseball games, a tour of the UPS Global Operations Center and the Evan Williams Bourbon Experience.

“My experience has been life-changing,” Caldwell said. “The ability to step away from the ‘busyness’ of military life for one month allowed adequate time to reflect and explore diverse perspectives regarding critical aspects of my military profession.”

In its inaugural iteration, the strategic broadening seminar included a mixed cohort of non-commissioned, warrant and commissioned officers ranging across several specialties.

UofL was one of only two civilian universities – and one of five institutions overall – in the country selected to host the program. The University of North Carolina’s Institute for Defense and Business piloted the concept for the Strategic Broadening Program in 2012.

“I want to particularly thank President Ramsey who not only gave of his time to help us educate and inspire these officers, but to his office of military initiatives. From conception to conclusion, Renee and Kevin Finnegan, who head the initiative, were essential partners,” Gregg said.

Since 1991, the McConnell Center has conducted educational programs for teachers, students (both high school and college) and the general public focused on developing a strong knowledge of American history and fostering creative thinking about the possibilities and problems of citizenship in the twenty-first century.