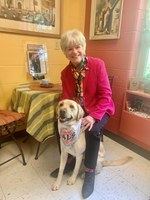 Rhonda Dahl Buchanan is a Professor Emerita of Spanish at the University of Louisville. She served as the  Director of the Latin American and Latino Studies Program from 2002 until 2022. During the last three years as the LALS Director, she was accompanied in her office by her yellow labrador Jake, The LALS Therapy Dog, who was a fabulous recruiter for the three LALS degrees: Major, Minor and Graduate Certificate. Dr. Buchanan is the rare recipient of all three university-wide Distinguished Professor Awards: the UofL Distinguished Teaching Professor Award (2000), the UofL Distinguished Service to the Community (2011), and the UofL Distinguished Professor of Outstanding Scholarship, Research & Creative Activity (2019). In 2004, she was named the recipient of the UofL Trustees Award, “for exceptional impact on the lives of students.”  In addition, she is the recipient of the 2015 Provost's Award for Exemplary Advising, the 2015 National Academic Advising Association (NACADA) Award in the Faculty Advising Category, and the 2016 NACADA Region III Outstanding Faculty Advisor Award for the State of Kentucky.

She is the author of numerous articles on contemporary Latin American writers from Argentina, Colombia, and Mexico, and the editor of a book of critical essays, El río de los sueños: Aproximaciones críticas a la obra de Ana María Shua (2001; available online at http://www.iacd.oas.org/Interamer/shua.htm). She has also translated the works of the Mexican author Alberto Ruy Sánchez, and is the recipient of a 2006 NEA Literature Fellowship for the translation of Alberto Ruy-Sánchez’s novel The Secret Gardens of Mogador: Voices of the Earth (New York, White Pine Press, 2009). In addition, she has translated the works of the Argentine writers Mempo Giardinelli, Tununa Mercado, Ana María Shua, and Perla Suez. For a complete list of her publications, please visit her website at: www.rhondadahlbuchanan.com.