The George R. Pack Award for Most Outstanding Chemistry PhD Dissertation was established by colleagues, family and friends to recognize in perpetuity Dr. Pack’s role in growing a vigorous departmental research program, his contributions to the University’s research environment, and his appreciation of the key role that graduate students provide in the research process. 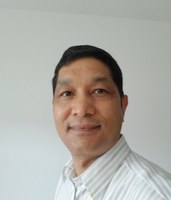 Dr. Ram Krishna Hona is from Nepal. His education in Chemistry began with his receipt of a B.S. (1994) in Biology and Chemistry and an M.S. (1996) in Chemistry from Tribhuvan University in Kathmandu, Nepal. He held various research-focused positions in Nepal before relocating to the United States in 2010. He then earned a second M.S. (2014) in Chemistry from New Mexico State University. He then moved to the University of Louisville, where he focused on investigating and synthesizing materials for use in renewable energy systems and received his PhD in December 2019. In January 2020, Dr. Hona joined Dr. Yiying Wu’s group at Ohio State University as a postdoctoral research scholar where he continued to pursue research related to the formulation and synthesis of novel functional materials, in particular by developing a novel compound that has efficient electrolyte properties for potassium super oxide batteries.

He had multiple academic positions in Nepal, such as Assistant Lecturer of chemistry (Tribhuvan University), Vice principal and principal (2003-2005) of Lalitpur College situated at Kopundol, Kathmandu, Acting Principal (2005-2007) of Global College at Lalitpur, and Department chair of Science and Mathematics at Sainik School, Bhaktapur (2007-2010). He was a founder principle of Advanced Academy Higher Secondary School situated at Bhaktapur, Nepal, where he provided free education to the students from socio-economically poor background.

As a sportsman, he was a soccer player, a volleyball player and a gymnast.

2021 Chemistry Award Winners of the College of Arts & Sciences Faculty and Staff Awards
May 07, 2021