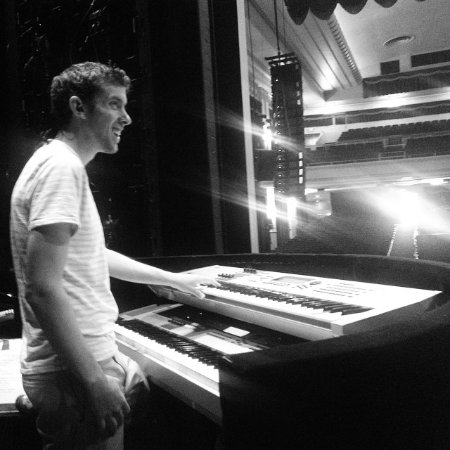 Chris fell in love with music as a young kid, but didn’t fall onto a piano bench until high school, when he broke his leg. Just two years later, he was invited to Kentucky’s prestigious Governor’s School for the Arts program. In 2008, Chris received a bachelor of music from Belmont University, and in 2010 earned his master of music from the University of Louisville. Chris has toured internationally with Rain: A Tribute to the Beatles for five years, and loves sharing his passion for The Beatles’ music with fans all over the world. Chris currently serves as adjunct music faculty at Belmont University, and owns Mockingbird Musicians - a Nashville contracting service for live music and entertainment. Chris was just appointed Music Director/Performer for the “Eat Your Science” tour, Chef Alton Brown’s live show, which will tour for two months in 2015. Chris just released his first piano pop record, “Out in the Open,” which is available on iTunes.

Here is what Chris has to say to some of our questions:

When did you start your career as a musician (at what age did you develop a love for music, or know you wanted to be a musician when you grew up)??

I have always been drawn to music, but didn't really acknowledge a talent for it until I broke my leg in 2001 and couldn't walk all summer. My immobility forced me to sit on a piano bench and be patient for about 3 months straight. By the end of that summer, I had progressed enough that I didn't need much encouragement to keep going!

Why did you decide on the U of L School of Music for college (for your Master’s Degree)?

I was born in London, KY but I moved away for my undergrad. I really missed Kentucky and my teach at Belmont University spoke very highly of Dr. Naomi Oliphant. I really wanted to study with her and was so fortunate to have done so!

What was your career path after college? How long did it take you to find a job?

My dream job sort of fell into my lap! During grad school, I took part in a competition at a Beatles festival and won! Not only did I get a good chunk of cash and a trip to perform at the Cavern Club in Liverpool, but one of my (eventual) colleagues in Rain: A Tribute to the Beatles was a judge and invited me to audition soon after. I started the next fall, as if it were just another semester!

What do you enjoy most about your current position?

I really have about 6 part time jobs that add up to one amazing dream job. In addition to teaching and touring, I get to perform around Nashville in a live setting and I also own my own music contracting business, which gives me a chance to exert my type-A instincts...

What advice/tips would you give to other UofL music students? 6. What should students know about the music industry today? 7. What does it take to be successful in this field?

I think of these so similarly that I'll roll them into one: I have come to believe that talent is one of the least important parts of success in the music industry. There are SO many talented people who are ready and willing to work, that you have to do non-musical things to set yourself apart. If you show up to a gig prepared and execute it professionally, you will get called again! I have personally witnessed more talented musicians being passed up for less-talented ones who are more reliable and professional.

Also, you have to consider multiple factors when accepting a gig. What contacts will you make? Who will hear and see you play? Also, avoid the trap of thinking, "Well, I'm doing this for less money so I don't have to do my homework..."

How should students network? What is the best way to find a job in this field?

I believe if you do your best work at every gig you take, the work will find you!

Any advice on the job search process...resumes, interviewing, auditioning, etc.??

Do your best to never let a bad audition get you down. Nobody gets every opportunity, and just playing well in front of people can go a long way, even if you aren't called for that specific gig.