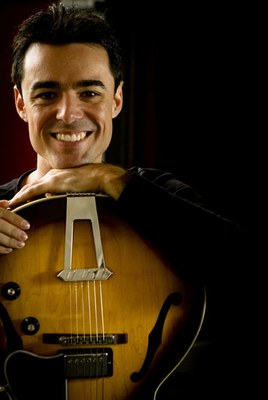 Bruno Mangueira is one of Brazil's finest jazz and bossa nova musicians. Guitarist, composer and arranger, Bruno is a virtuoso who plays bossa nova and other Brazilian styles with passion and authenticity. He has performed with many of Brazil’s most recognized contemporary artists including Toninho Horta, Nailor Proveta and Léa Freire. Recent performances include serving as a guest soloist, composer and arranger in concert with Paulo Jobim and Orquestra Popular do Cerrado, the University of Cincinnati College-Conservatory of Music’s Philharmonia Orchestra & Jazz Ensemble and Campinas Symphony Orchestra. Mr. Mangueira is also well versed in the American jazz language and repertoire.

Many of Bruno's compositions for small ensemble, big band and symphony orchestra are featured on his 2010 self titled CD, which was released with concerts in Sao Paulo and New York City, and pre-selected for the 2011 Brazilian Music Award. His new album CAMBURI, his second, introduces a collection of original music showcasing various Brazilian styles blended with jazz accents, featuring acclaimed guest artists Leila Pinheiro, Filó Machado and Gilson Peranzzetta.