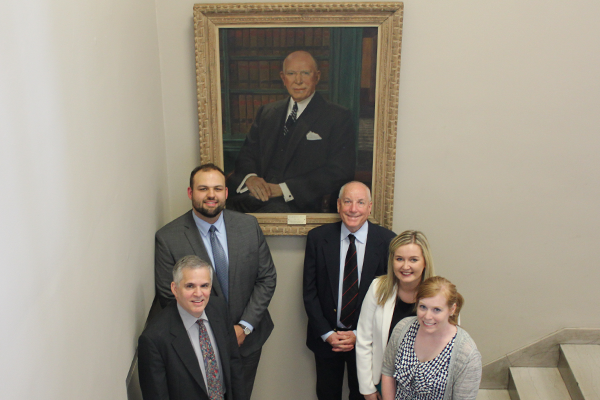 One of the joys of my job is having the opportunity to form relationships people who have deep ties to our law school.

Last week, I had the pleasure of visiting with Lowry Watkins Jr., whose connection to the Brandeis School of Law stems from his grandfather, William Marshall Bullitt, who served as U.S. Solicitor General from 1912-1913. Mr. Bullitt graduated from the University of Louisville School of Law in 1895.

Mr. Watkins has ensured that his grandfather's legacy lives on at the law school through a variety of avenues, including the William Marshall Bullitt Memorial Lecture in Law, a Chair in Business Law, a scholarship for Kentucky natives, gifts to the Law Library and a constitutional law scholarship.

We at the law school are incredibly thankful for Mr. Watkins’ generosity, and today I want to talk about another area to which he contributes: The William Marshall Bullitt National Moot Court Team. Through an endowment, established in 2005, Mr. Watkins makes it possible for our students to travel to and participate in the National Moot Court Competition.

I spoke with Professor Sam Marcosson, who has coached the team for more than 20 years, about the impact Mr. Watkins’ gift has on the team — and on generations of future lawyers.

Professor Marcosson is proud of the team’s record of success — it has advanced deep into regional finals in six of the past seven years, often beating our ACC rivals — including Duke University School of Law — and schools like Wake Forest University School of Law and William & Mary Law School. Arguments for the regional finals are held at the Fourth Circuit Court of Appeals in Richmond, Virginia.

This year, the team comprised 2018 graduates Katherine Tapp and Rick Whetstone and rising 3Ls Jake Smith and Irina Strelkova. They worked in two-person teams to address two problems. Each team writes a brief that argues both sides of the assigned problem. This year, the problems dealt with First Amendment issues surrounding alleged retaliatory arrest and Fourth Amendment issues of government searches.

Professor Marcosson praises the dedication and hard work that this year’s team put in preparing for the competition and says that for him, having the chance to work one-on-one with students keeps him engaged in the team. Professor Marcosson, who worked for the appellate staff at the Equal Employment Opportunity Commission in Washington, D.C., before entering academia, says he also appreciates the opportunity to teach the next generation of appellate attorneys.

“I love to use what I did and the experience I gained to develop these skills with students,” he says.

And, Professor Marcosson acknowledges, none of this would be possible without dedicated supporters like Lowry Watkins Jr. He, I and our students — as well as the legal profession as a whole — owe him gratitude for carrying on his grandfather’s legacy in this practical way.