Celebrating the impact of Brandeis stakeholders across the commonwealth

Conventions tend to be whirlwind events, with people to meet, events to attend and always more things to do than one could ever manage. This was certainly true for my first Kentucky Bar Association Annual Convention, which has been richly satisfying. 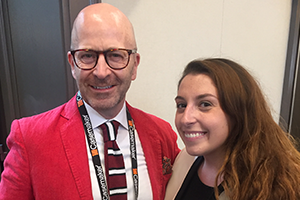 The last 24 hours were especially so. I began last evening at the opening reception, where I not only saw many new friends but also ran into our rising 2L Caitlin Kidd. Caitlin is at the convention as part of her summer fellowship. Caitlin was selected by Legal Services Corporation and Equal Justice Works for a Rural Summer Legal Corps student fellowship. She is one of 29 law students nationwide, and two from Brandeis (the other is Lauren North, also a rising 2L). Caitlin’s summer is focused on launching the Justice Bus, a mobile, “pop-up” legal office sponsored by Legal Aid of the Bluegrass. Caitlin and her LAB co-workers will be taking the bus to 10 rural counties in Kentucky to provide free legal assistance to underserved individuals in those areas. 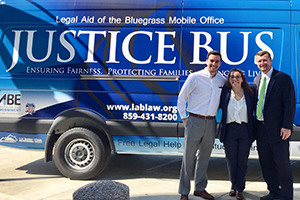 The project reveals the ingenuity of lawyers as they seek to find novel ways to provide justice access, and I wish them the greatest success.

Then I headed to our alumni reception, generously hosted at the Lexington offices of Bingham Greenebaum Doll. We had more than 50 alums and friends show up and it was a great chance to share with them what is happening at the school of law. It could not have been possible without the organizational efforts of 2014 alumus and Bingham attorney Aaron Marcus and 1988 alumna Bonnie Kittinger. 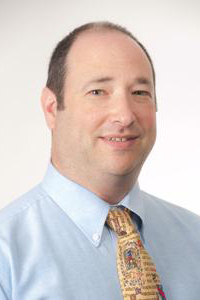 Thursday, June 14, began with an extended breakfast with the other area law deans, including Dean David Brennen of UK, Interim Dean Verna Williams of Cincinnati and NKU Interim and our 1994 alum Michael Whiteman.

I then rushed to a terrific panel moderated by outgoing KBA President Bill Garmer on the judiciary, entitled “A Co-Equal Branch-Judicial Selection and Independence in an Age of Anxiety.” The panel included my colleague Professor Sam Marcosson and his frequent sparring partner, Professor Paul Salamanca from UK. These two constitutional scholars debated the status of the judiciary in President Trump’s US — Sam from the left and Paul from the right. It was a spirited and very respectful debate, as the best legal argument is. 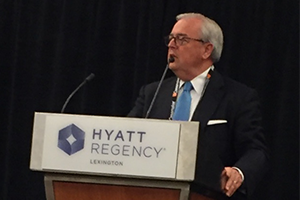 Next came a luncheon for the Kentucky Bar Foundation. The KBF luncheon was opened by Supreme Court Chief Justice John D. Minton Jr. The event began with the announcement of the new KBF Life Fellows, including my colleague Professor Les Abramson.

The KBF event not only announced the award of a generous scholarship to each of the law schools in the Commonwealth but also made a $5,000 award to the Central High School Partnership run in conjunction with the school of law by my colleague Professor Laura Rothstein. We at Brandeis are very proud of the Central High Partnership and of the work of Professor Rothstein and others like Professor Cedric Merlin Powell, Professor Enid F. Trucios-Haynes and Professor Justin Walker, who help teach in the pipeline program. 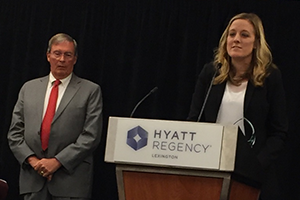 The host was our 1972 alum Harvey Johnston, from Bowling Green. Harvey and his wife, Sarah, have been generous supporters of the school of law and his tenure as KBF head has been distinguished by fundraising success. Under Harvey’s stewardship — having raised more than $2 million, all of which gets distributed to worthy entities across the commonwealth. During his tenure, Harvey worked closely with KBF Executive Director Guion Johnstone, a 2011 Brandeis grad.

The evening’s banquet brought more kudos for a distinguished alum, in this case the Chief Justice’s Special Service Award for 1968 graduate Grant Helman. Since 1982, Grant has been chairman of the Character and Fitness Committee, administering the oversight of character and fitness evaluations of generations of Kentucky lawyers. 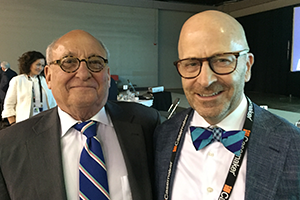 In short, the past 24 hours made me proud of the variety of ways in which some of our stakeholders — students, faculty, and alums — are serving the commonwealth and the profession. Brandeis is a key player in the health of the rule of law and professional service in Kentucky and beyond.