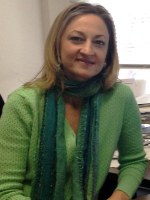 Dr. Tricia Gray teaches courses in Political Science and Latin American and Latino Studies at the University of Louisville, including an Introduction to International Relations, Women in the Developing World, and courses on Latin American domestic politics and foreign relations.  Gray's research has investigated comparative studies of gender and politics in Latin America and international relations in the region.  In 2003 Gray published the article “Electoral Gender Quotas: Lessons from Argentina and Chile” in the Bulletin of Latin American Research and in 2005 the chapter, “Chilean Foreign Policy in the Global Era: Crouching Tiger, Hidden Dragon” in the book Latin American in the New International Political System: Political, Social, and Economics Challenges, edited by Jose da Cruz and Eduardo Gomez.  Her paper “Gendering the Digital Divide,” co-authored by Jason Gainous and Kevin Wagner, was presented at the Latin American Studies Association Conference in San Juan, Puerto Rico on May 26-28, 2015. Additionally, her paper "The Internet and Activism in Latin America: Partially Stymied," co-authored with Jason Gainous and Kevin Wagner, has been accepted Technology and Society Conference on February 18-19 2016 in Buenos Aires, Argentina. Furthermore, she will be doing a Diálogo on José Enriques Rodo’s work Ariel on October 29, 2015. Gray’s current research projects focus on gender mainstreaming through national policy machineries for women in Latin America and the rise of Sino-Latin American foreign relations. Most recently, she has been awarded the A&S Teaching Innovation Award in 2020 and became the Vice Chair of the Political Science department.

Dr. Gray was born in Nebraska but grew up in various places in Kentucky and is an alumnus of the University of Louisville (1993).  She earned a Masters (1994) and Ph.D. (2000) in Miami University in Oxford, Ohio.  She is married and has two children.  In addition to her academic pursuits, Gray enjoys travel, camping and music.