Sara reflects upon her experiences abroad 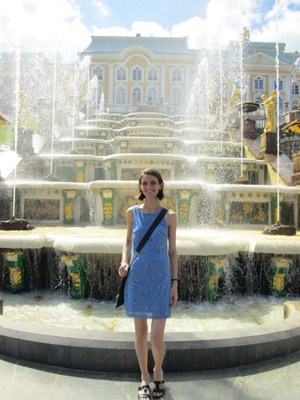 In the summer of 2013, I spent a month in St. Petersburg, attending the SRAS (School of Russian and Asian Studies) program for Art and Museums in Russia.  I visited the literary museums of Dostoevsky and Pushkin, the Zoological Museum, the Museum of Ethnography and the ethnographic collections of Kunstkammer, the art collections of the Russian Museum, and the art and archeology collections of the world-famous Hermitage Museum.  The program also included tours of many other historic sites in and around the city, as well as visits to current artists' studios.

As an anthropology student aspiring to a career in archaeology, my experiences in Russia will be a great addition to my education. Aside from the fact that, for an archaeologist, any and all knowledge is potentially useful (which is part of what drew me to the field), I was also able to visit a variety of different types of museums and compare the how each presented and curated their information and materials.  I got to look behind the scenes of the Hermitage, one of the best museums in the world, and talked face-to-face with members of its staff about their areas of expertise. I visited the Hermitage storage facilities, where painting restoration expert Alexei Nicholski explained the process and methods of his work, and the work that goes into ensuring the preservation of art. I viewed the archaeological collections of the Hermitage on more than just a tourist level--for one thing, I had multiple days to photograph and study the artifacts, and for another, because I got, through my program with SRAS, a personal interview with one of the curators, Maria Menshikova. Learning from her about the similarities in method but the differences in structure of curation work in Russia versus in the United States was enlightening, and she is, as a person, inspiring to a student like myself.

One of the most interesting aspects of the study of material culture through archaeology, to me, has always been gaining understanding about how innovations develop and how cultures influence one another–the way symbolism, technology, and ideas spread. What better place in the world to experience this phenomenon than Russia, at the threshold between Europe and Asia, always at the crossroads–and always so aware of itself being at the crossroads? This sense of cross-cultural influence is omnipresent in St. Petersburg, from the oldest archaeological collections in the Hermitage to the studios of current artists I visited. It's the theme in Russian paintings from the 18th century to the Avant Garde movement. It's in Dostoevsky's novels and Pushkin's poetry. It’s in the Czars' collections of world art and treasures. It's in the architecture of buildings from the time of Peter I to Catherine II to post-revolutionary times. It's a place that has always been curious, that's always learning and adapting and searching for new ways to incorporate old ideas into itself.  For me, it was the perfect place to dive into a different culture, explore an incredible city, and study, first-hand, the museum side of archaeology. 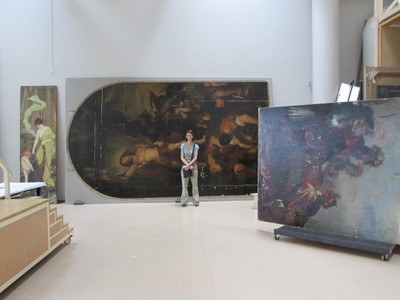 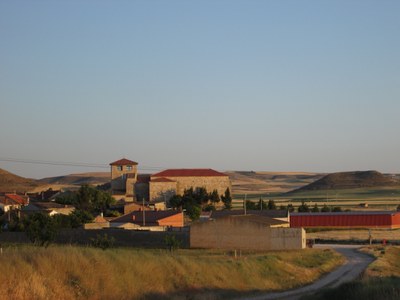 This June, I spent three weeks at an archaeological field school in northern Spain, working on an Iron Age necropolis called Las Ruedas. The necropolis served as a burial place for the Vaccean city of Pintia, which housed about 5,000 residents over 170 acres, and was occupied from around 400 BCE to roughly 600 CE. The necropolis contains burials from the Vaccean, Roman, and Visigothic phases of the area’s history. The Vacceans who first built the city of Pintia were a highly advanced Celt-Iberian civilization, with skilled artisans and excellent defensive structures–though the Romans did eventually conquer the city and settle in the area. The site straddles a stream, with the residential area and necropolis on one side, and the crematorium and artisans’ quarters (metal works and pottery workshops) on the other, which would have reduced the risk of fire in the residential part of the city.

The interpretive material the Pintia staff has put together for Las Ruedas Necropolis emphasizes the link between modern-day residents of the region and their own ancestry (the Vaccean people who lived here before them, whose descendants they are). Site director Dr. Carlos Sanz is especially focused on making the graves of the necropolis more personal. Each of the excavated tombs is marked with rough chronological dates, age at death and sex of the deceased (when either can be estimated), and requiem poetry (70 poems are by Aderito Pérez Calvo, a late friend of Dr. Sanz, and the rest are Celtic or Latin requiem poems). The stela (standing stones) which mark the graves have been re-placed in their original position, and a cypress tree is also planted near each excavated grave. There are larger, modern monuments with Celt-Iberian symbols, including one dedicated to the warriors who were not cremated (like the majority of Vacceans), but exposed to the vultures after death. Another is a Roman-style monument of tile, engraved and decorated in Vaccean patterns, which Dr. Sanz made himself. It has spaces where cylindrical tubes containing catalogued remains can be inserted once excavation and analysis is complete. This makes it possible to return the remains to the necropolis, while also maintaining provenience for other researchers who may analyze the remains in the future. An empty area in Las Ruedas is now used for dedications to people who have supported and helped with the project who have since died. The monuments and dedications bring to the forefront that the past and the present of the area are linked in important ways, that heritage has meaning, and that long-dead ancestors were real people with real lives. I found the care and attention to detail in the interpretive material both touching and impressive. It highlights how important the presentation of information can be in stressing the significance of a site and giving visitors a sense of connection to the people of the past.

Within walking distance of the necropolis is the tiny village of Padilla de Duero (population around 70), where the University of Valladolid’s Federico Wattenberg Center for Vaccean Studies is located. The Center, founded by Dr. Sanz, houses a small museum (which doubles as a living/dining area for students), a dormitory and kitchen, a laboratory, and a curation facility. Eva Laguna is in charge of putting together the publications for the Center, and she and Dr. Sanz cook all of the delicious Spanish meals for the students, as well. We were a small group–only five students–so we each got a lot of guidance during work hours from Dr. Sanz and Rita Pedro, the international coordinator, translator, and co-director of excavations.

On our days off, we went on excursions to see, for example, the castle at Piñafiel, the Vaccean exhibit in Palencia, and the University of Vallodalid’s rare and antique book library, as well as part of the university’s anatomical collections. We went canoeing one afternoon through a gorgeous canyon with cliffs full of birds’ nests. On our last full day, we visited an excavated Roman villa, as well as Altamira and Monte del Castillo, two caves containing 18,000-year-old paintings.

Work days were split in half: by 7:45 a.m. we were on site working, then headed back to the Center (or, more often, Angelina’s, the cafe down the street from the Center) around 1 pm. At 2:30, we had lunch, followed by siesta time (or free time, if you could stay awake), and at 5 we headed back to work. Dinner started around 9:30 p.m., but since we genuinely all liked each other, we usually stayed up late socializing, swapping music, and watching movies together instead of going to bed early.

Even with only three weeks of fieldwork, we put in 150 excavation hours, plus seminars on Vaccean culture, osteology, artifact processing and repair, archaeological drawing, and stratigraphy. While stratigraphy may not sound like the most exciting thing about fieldwork, it’s one of the most important things for an aspiring archaeologist to learn, and it’s not something I could have learned from a textbook or in a classroom. Even though I understood that stratigraphy provides the context for the materials and shows the layout of the site’s features (pits, structures, etc.), when I first started digging I had no idea what to look for in terms of changes in soil composition. After spending a few days in the field with instruction, I couldn’t believe I hadn’t been able to see feature outlines or composition changes from the start. It isn’t that stratigraphy is particularly difficult, but you do have to physically work on a site in order to get the hang of it.

We excavated two units, each of us spending some time digging and some time screening for artifacts. Most of what we found were pottery sherds and faunal remains (burial of portions of the funerary feast was common), but we also found small pieces of cremated human remains, metal objects (brooches, pieces of weapons or belts, etc.), and canicas (decorated ceramic marbles, also traditionally buried in Vaccean graves). Just when it looked like we might not uncover an actual tomb during our excavation, we came to a collection of intact vessels–including a funerary urn. After cleaning all around the area to make sure we didn’t miss any associated artifacts, we took elevation measurements and drew the tomb into the site map, photographed everything in context, and took the pottery back to the Center for processing. The interior of each vessel was scraped with a scalpel in order to take a small sample to be tested. These samples are analyzed to determine the contents of the vessels–whether they contained wine, olive oil, or ash from human remains, for example.

Our success with the tomb coincided with Padilla de Duero’s feast of San Antonio, and we were invited to join the festivities along with the whole town. With cause to celebrate over our fieldwork and only a few days before the end of the program, it was the perfect time for a big feast in great company, followed by late-night dancing and singing.

I couldn’t have asked for a better field school experience, and I’m grateful to all the people who shared that experience with me–my hard-working fellow students and the always-informative Pintia staff, the staff of ArchaeoSpain and the University of Valladolid, and the kind and hospitable people of Padilla de Duero–as well as the people who made it possible for me to go: the University of Louisville Department of Anthropology and the Etscorn International Summer Research Awards Committee. 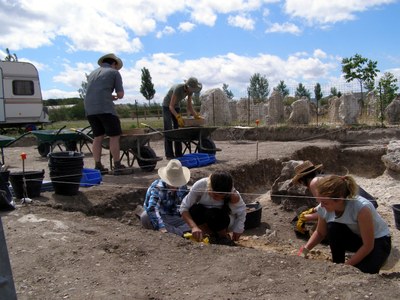 "National Anthropology Paper Competitions" The deadline for submission is September 15, 2022. Winners will be notified in early-to-mid October.
Jun 08, 2022

Lily Hoang from the University of Louisville was one of 25 undergraduate students competitively selected from across the country to the Toxicology Mentoring and Skills Development Training Program (ToxMSDT).
Oct 08, 2021