As a Biology major turned rogue in favor of the Anthropology Department, I found myself profoundly interested in biological anthropology and its forensic applications. Sophomore year I was deep into my biology classes studying subjects such as cellular molecular biology and organic chemistry. It was at this time I decided to take the Intro into Archaeology, Skeletal Forensics, and Intro into Biological Anthropology courses all in one semester to test out my interest in a field unfamiliar to me. Before long, I was hooked. I applied for my Forensic Anthropology minor and began volunteering in the Archaeology Laboratory during the summer of 2012. Within a few weeks of volunteering, Phil DiBlasi (Department of Anthropology) received a unique request that would change the course of my entire summer.

St. Martin of Tours, a local Catholic church on the corner of Shelby and Gray Streets, enlisted the help of Phil and his students with the disinterment and skeletal analysis of their two holy relics—the remains of Saints Magnus and Bonosa. St. Bonosa was allegedly martyred for her beliefs at the age of 16. St. Magnus was believed to be a Roman centurion who witnessed Bonosa’s death and was so inspired by her martyrdom that he chose to become a Christian. It was our job to carefully remove the remains from their sarcophagi and use osteological methods to determine whether or not the remains coincided with the Church’s record of the Saints.

For weeks during the summer, my fellow Biology major, Kristen Frisco, Justice Administration major, Sierra Jeffries, and Anthropology major, Lisa Hagan and I would all carpool down to the church and continue to analyze the remains as well as record all of the elements present under Phil’s advisement. Having already taken both Skeletal Forensics courses offered in the department as well as Intro into Archaeology, I felt well-equipped and prepared for the work that we needed to get done. Over the course of June and July we managed to get a complete record of both sets of remains and finish demographic profiles for both Saints.

I found this once in a life time experience to be incredibly rewarding. For the first time, I felt like I could confidently apply skills learned from classes at school to a project in the field I aspire to work in one day. The skeletal forensics courses in the Anthropology Department definitely prepared me for the work we did during the summer. The hardest part about the project for me was actually keeping our findings secret from my family and friends until the reveal and reinterment of the Saints. Now as a graduating senior, I am applying to Forensic Anthropology and Forensic Archaeology programs at graduate schools in the US as well as in the UK and I have UofL to thank for such wonderful opportunities to have led me to this point in my life. 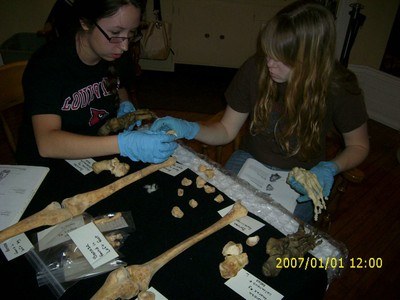 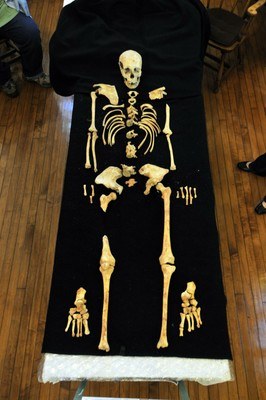