UofL School of Music will present 'The Magic Flute' in April 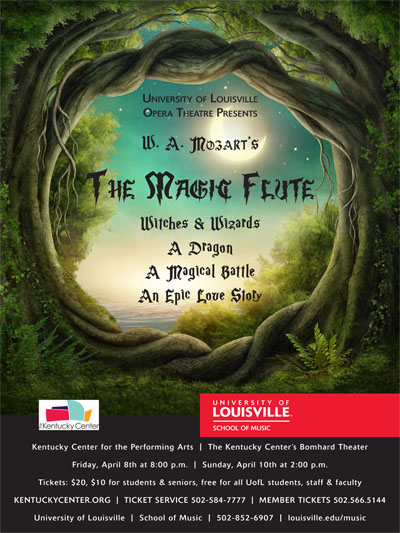 For its annual production, UofL’s Opera Theatre presents one of the most beloved, family-friendly classics: Mozart’s “The Magic Flute,” April 8 and 10 in the Kentucky Center’s Bomhard Theater.

With witches and wizards, a dragon, a magical battle and an epic love story, the opera is essentially a fairy tale, said Michael Ramach, co-director of opera theatre at UofL.

UofL’s rendition will play up the story’s magical aspects with special effects such as smoke, black lights, video projections and slight-of-hand tricks.

The show is an accessible introduction to opera for those who may be unfamiliar with the age-old art form, but are curious. The two-act production is in English and is a Singspiel, a form that includes both singing and spoken dialogue.

With the full orchestra behind the singers, who will be staged front-and-center, the show will feel intimate, Ramach said.

“For 500 years, opera was the most popular art form on earth, so they were written for everyone to enjoy,” he said. “‘The Magic Flute’ is a wonderful story of good and evil with great tunes. It’s for everyone in your family.”

The story, alternately a serious and comic exploration of love, truth and the search for enlightenment, portrays the education of mankind, progressing from chaos to rational enlightenment by means of trial and error. “The Magic Flute” premiered in 1791 in Vienna and was one of Mozart's last works before he died.