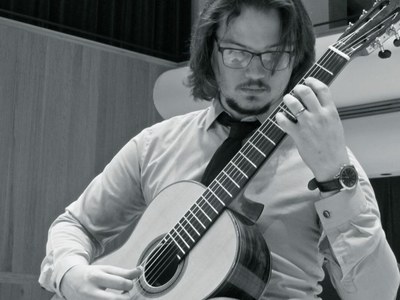 Jordan Taylor, a graduate teaching assistant at UofL’s School of Music, has spent the past year and a half planning the Ghana National Music Festival, which will come to fruition July 24-31 at the University of Ghana in Accra.

Taylor claims this will be the first festival of its kind in Ghana, with a focus on classical music pedagogy, performance and academic training. His objectives are to promote artistic development among that country’s youth, and to facilitate international collaboration.

The festival will also mark a sort of homecoming for Taylor, who spent his formative years – 1993 through 2006 – growing up in Ghana with his missionary parents. His family lived in the capital city of Accra for a year, then moved to a remote area, Ho, for three years before spending the rest of their time in Takoradi.

“Growing up there was fantastic. I love the people, the culture, the food, everything about it,” Taylor said. “The musical history and style is very interesting.”

Taylor himself didn’t pick up music until he was back in the United States, however. He “failed at” piano and trumpet, but gravitated toward the guitar – folk and steel string, specifically – after learning Johann Sebastian Bach’s Jesu, Joy of Man’s Desiring.

“That song made me realize this is what I really loved to do. A few years later, in 2009, I began studying classical music formally,” he said. “It was something that just happened by chance and it helped me transition back to the States.”

Taylor admits he was socially awkward upon his return to the U.S. Although he was born in Florida, he had lived in Ghana since he was 1.

“Coming back to the U.S. was a culture shock. It was classical guitar that got me out of that rut,” Taylor said. “Music resonated with me. It pushed my social skills beyond where I was at the time.”

Taylor stuck with it, eventually receiving his bachelor’s degree in music and performance from Columbus State University in Georgia. He received a full TA, alongside Professor Stephen Mattingly, to receive his master’s degree from UofL, and graduated last month. He calls Mattingly a mentor.

“We really hit it off and I cannot even begin to explain how much I learned from his program. It’s been really incredible. (Mattingly) is a big reason the festival in Ghana is actually happening,” Taylor said.

Taylor received a $1,000 summer music grant and Mattingly suggested he pursue something “non-generic; something greater than what I wanted to do.” He put the money toward the initial visit to Ghana to facilitate planning sessions with the university and symphony there.

Professor Mattingly will accompany Taylor to Ghana for the inaugural festival in July, as will Ciyadh Wells, also from UofL’s School of Music. The three of them will work to build relationships, as well as teach and perform alongside young Ghanaian musicians and symphony members. Taylor hopes they are also successful at planting seeds for future, annual festivals.

“This year’s event is specifically a collaboration with UofL and the University of Ghana. The priority is just to make sure it happens. I don’t expect it to be easy, but we are keeping it small so we have room to grow and the infrastructure in place to do it again,” Taylor said.

In the fall, Taylor will move onto another opportunity as a TA at the Shenandoah Conservatory in Virginia, where he will pursue a PhD. If he reaches his goal of extending this festival beyond the first year, however, he will keep the invitation open for UofL faculty to be collaborators.

“I am not concerned about personal gains from this. It doesn’t need to be tied to a school I teach at,” Taylor said. “I just want it to be a partnership between the U.S. and Ghana. We have strong relations politically, economically. But within the arts, there is very little collaboration. I want this to be a catalyst for new opportunities for performance initiatives, classical music programs, exchange programs and more.”