Retired Professor of Clarinet Dallas Tidwell passed away on the afternoon of May 14, 2015 after a long and determined battle with cancer. 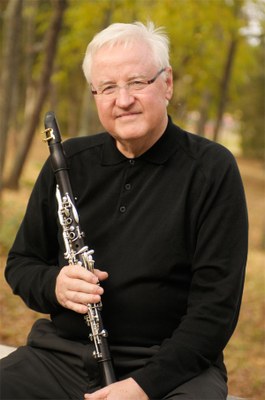 1975 and became an associate professor in 1996. Prior to his full-time appointment at UofL, Professor Tidwell performed for 26 years as the associate principal clarinetist of the Louisville Orchestra where he participated in approximately 8,000 rehearsals, concerts, ballets and chamber music concerts. In addition to his orchestral career with the LO, Dallas was an active collaborative musician, including serving as a founding member of the School of Music’s Faculty Chamber Artists and Grawemeyer Faculty Chamber Players, as well as the Commonwealth Clarinet Quartet and Kentucky Center Chamber Players. As a soloist, Professor Tidwell was a well-known recitalist throughout the region, presenting solo performances in Japan and the eastern United States, and concertos with the Louisville Orchestra, the University Symphony Orchestra and Wind Ensemble. Notably, Dallas’ affiliation with the LO during the orchestra’s First Edition Records program reinforced his commitment to contemporary music and the commissioning of new works.

While music performance was a very important part of his professional life, Professor Tidwell’s devotion to his students was unmistakably clear and consistent throughout his career at UofL and one of the reasons he was among the most popular faculty members in the School of Music. Notably, his students quickly realized that their clarinet teacher embodied the professional and musical skills each sought in themselves, and moreover, that his goals for them went well beyond musical ones in seeking to achieve his goals for them as people; a sense of mature self-confidence, curiosity, modesty, commitment, patience, and high standards. Dallas’ commitment to his students while they studied with him and later in their lives was always clear, as was their respect and admiration for him as a teacher and, later, as a friend and peer.
Dallas retired from service to the School of Music at the end of the academic year in 2014 along with his wife, UofL Professor of Voice Edith Davis Tidwell. Both had been previously honored as Alumni Fellows of the School of Music, the most prestigious honor bestowed by the university Alumni Association, and at their retirement an endowed scholarship fund was established to honor their legacy of excellence in music performance, teaching, and service to the university and Louisville community. Friends who would like to make a memorial donation to this endowment may send a gift to the Dallas Tidwell and Edith Davis Tidwell Endowed Fund in Clarinet and Voice Studies at the University of Louisville School of Music, Louisville KY 40292.

A service celebrating Professor Tidwell’s life will be held on Wednesday, May 20th at 11a.m. at Highland Presbyterian Church, 1011 Cherokee Road, with burial at Cave Hill Cemetery immediately following. Visitation will be at Pearson’s, 149 Breckenridge Lane, on Tuesday, May 19th from 3 to 8 p.m.