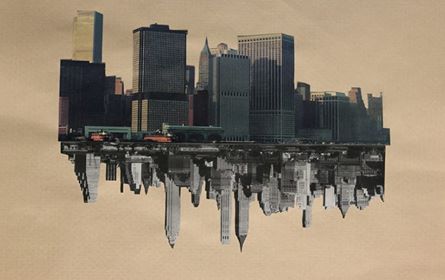 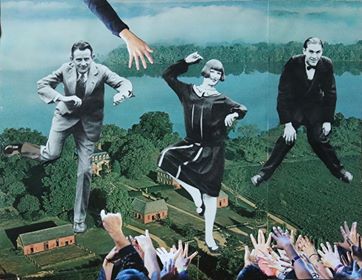 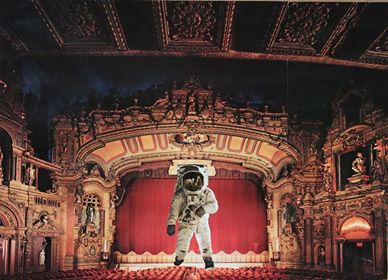 I’ve talked about collage as a form of adoption, of a second life. That’s part of it, as I was adopted. But really, in the end, I just see things in pictures, some forms (people usually, at least at first) that seem to want to be recontextualized. And how it’s a chance operation, as it’s a chance operation for each of us any day anyway. Who knows what could happen next? Whatever fits.

Where does this house go? That slant of light matches this one from 20, 50 years ago. And here they are now, once scene. Yes, but what does collage MEAN?

There’s a purity to it, to cutting pictures from magazines and gluing them together. It’s the purity of their previous existence. These are obviously divorced from a previous context. There’s no trick about it. And then here, they’re juxtaposed.

It’s my fascination with the uncanny, I suppose. Yes, this isn’t what I’m showing it to be. When these pictures were taken, they were part of something, and now they’re part of something they know nothing of. It’s an imaginary afterlife, and it makes me very, very happy to be a part of it.

To read John Gallaher's poetry in this issue of Miracle Monocle, click here.

JOHN GALLAHER’s poetry collections include Levis Poetry Prize–winner The Little Book of Guesses (2007), Map of the Folded World (2009), Your Father on the Train of Ghosts (2011, written in collaboration with G.C. Waldrep), and the book-length essay-poem In a Landscape (2014). With Mary Biddinger, he edited The Monkey & The Wrench: Essays into Contemporary Poetics (2011), and with Laura Boss, he edited Time Is a Toy: The Selected Poems of Michael Benedikt (2014). Gallaher is an associate professor at Northwest Missouri State University and has served as an editor for the Laurel Review and for the Akron Series in Contemporary Poetics. He lives in rural Missouri.