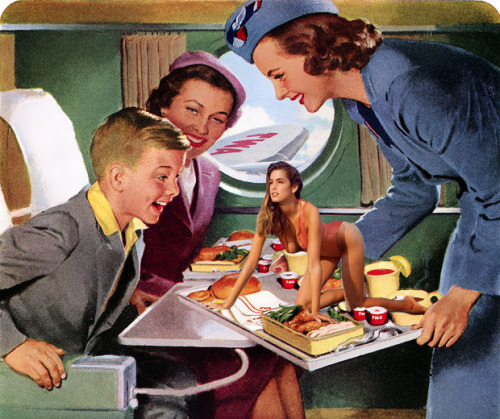 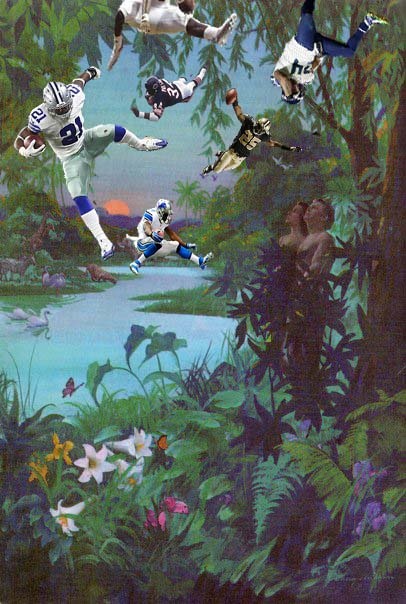 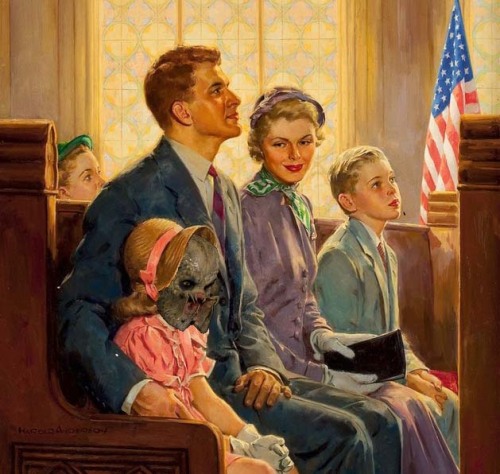 The Dhammapadda, which collects the sayings of the Buddha, begins with these lines: “we are what we think. / all that we are arises with our thoughts. / with our thoughts we make the world.” I’ve been thinking about these lines a lot lately. If we make the world with our thoughts, what are thoughts made of? Words, surely, but also images. With images, then, we can make—and remake—the world. In making these collages, I wanted to remake a specific kind of world: namely, I wanted to juxtapose and engage the competing mythologies of my childhood. That’s really the main impulse here: to create a space where potent images from pop culture—the pageantry of the NFL, the startlingly alien face of the predator, and the allure of a supermodel—could make appearances in universes they otherwise might never visit: the Garden of Eden, say, or the primly sanitized world of the American suburbs in the 1950s. It was interesting to me that a few tweaks to a familiar scene could completely transform—and undermine—the story and values of the original image. In the end, though, I think I was also just enjoying, as I always do, the process of finding a new way to be playfully subversive. The images above include Flying Cindy Crawford Special, Tailbacks at Twilight, and Proud Predator Mom.

MATTHEW VOLLMER is the author of Future Missionaries of America, inscriptions for headstones, and Gateway to Paradise. With David Shields, he edited Fakes: An Anthology of Pseudo-Interviews, Faux-Lectures, Quasi-Letters, “Found” Texts, and Other Fraudulent Artifacts. His next book, Permanent Exhibit, a collection of short essays, will be published later this year. He is an Associate Professor of English at Virginia Tech.