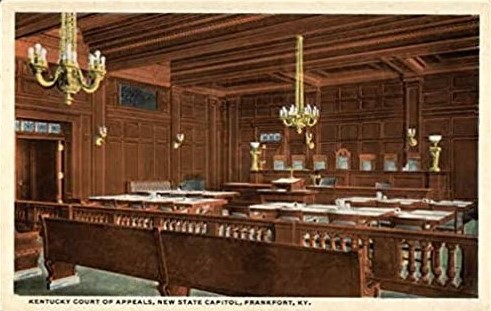 The briefs and records are great tools for lawyers and legal historians seeking to investigate the entire case behind a landmark decision. That is why the University of Louisville Law Library is proud to be one of the few depositories of the U.S. Supreme Court briefs and records system. However, the Law Library has another set of briefs, a collection of briefs from 1972-2002 submitted to Kentucky’s highest courts (which through 1975 was the Court of Appeals and from 1976 has been the Kentucky Supreme Court). The collection is based on batches of printed briefs submitted to the Court sent to the Law Library after completion of the case. Because the Court sent law libraries surplus briefs (UK also has collection and does not completely overlap), some important cases are not represented, presumably because the extra copies were distributed and “used up” in the process. (Some copies we received are heavily marked up, indicating the practical use of the document).

This small selection indicates some of the important cases for which we received briefs. (The collection stopped when the Supreme Court began posting on the website of NKU’s Chase School of Law). There are some unrepresented cases we would love to have briefs for, but there are great ones nonetheless, like Hilen v. Hays, establishing comparative fault in state tort law, and Commonwealth v. Wasson, which ruled that sodomy law used to criminalize the consensual relationships of LGTBQ residents violated the privacy protections of the Kentucky Constitution. We hope to expand coverage and encourage any lawyers participating in important cases to contact us about lending us old briefs for digitization).