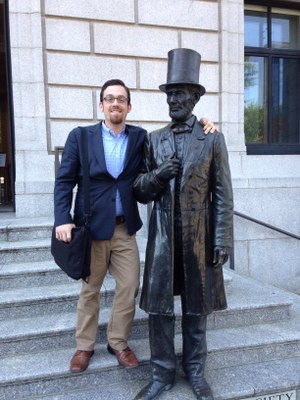 Interview:
1. Specific areas of research (how you chose this research, why it interested you):

My current master’s project analyzes how Catholic clergy in Missouri, Kentucky, and Maryland interpreted the U.S. Civil War.  The thesis focuses on how the anti-Catholic and antislavery movements of the antebellum period shaped the opinions and sympathies of Church officials in the Border States.  I contend that Catholic clergy interpreted the war through a religious lens, perceiving the Republican Party and the Lincoln administration as anti-Catholic. Attributing the war to the failures of Protestantism and opposing the policies of the Lincoln administration, the Catholic clergy simultaneously defended the Church and attacked northern evangelicalism, or what the prelates typically referred to as “Puritanism.” Because the majority of northern evangelicals—who exhibited both anti-Catholic and antislavery sentiments—joined the Republican Party during the decade before the war, Catholic officials in the slaveholding Border States and the South aligned with Confederate politicians. However, unlike Confederates who opposed the Republican Party because of its antislavery politics, Church clergy disparaged the party of Lincoln because of its affiliation with anti-Catholicism.

2. What made you go into this field of study?

I enjoy it!  I enjoy reading, writing, listening to lectures, participating in seminars, presenting papers at conferences, traveling to archives, examining nineteenth-century documents, analyzing primary sources, synthesizing historiographical arguments, and forming my own conclusions and interpretations about historical questions.  Regarding my study of U.S. history, I have always had an interest in the Civil War; although, I will note that my focus has shifted from traditional military history—battles, battalions, and bombardments—to an examination of the social and cultural history of the period.  My first major undergraduate research paper explored the role of sharpshooters (snipers) during the war, and now I am analyzing how religious leaders interpreted slavery, secession, and civil liberties issues during the conflict.

I plan to teach U.S. history courses—at the high school or university level—and write articles/books about the Civil War era.

5. What has been your favorite part of the graduate school experience at UofL?

In my opinion, the best part about graduate school is the opportunity to pursue one’s own research interests.  Graduate-level history courses typically require a student to write two or three book reviews and a research paper about the topic of his/her choice (related to the course’s overall topic and time period).

Fun Facts
Favorite book: This is a hard question to answer because I have several “favorite” books.  Eric Foner’s Free Soil, Free Labor, Free Men: The Ideology of the Republican Party before the Civil War (1970) has been the most influential book in my overall understanding of the Civil War era.  More recently, Mark Noll’s The Civil War as a Theological Crisis (2006) and W. Jason Wallace’s Catholics, Slaveholders, and the Dilemma of American Evangelicalism, 1835-1860 (2010) have informed my study of the American Catholic Church during the mid-nineteenth century.  And, although it has not appeared within any of my recent footnotes or bibliographies, I have long been a fan of Gary Paulsen’s Hatchet.
Favorite quote: “Hard work guarantees you nothing but without it you don’t stand a chance.” -(a plethora of coaches)
Favorite Vacation Destination: Sea Pines Resort, Hilton Head, South Carolina
If you weren’t in graduate school, what would you be doing now? Having spent several summers during my high school and undergraduate careers working at a local golf course, I envision myself serving as the head greenskeeper at an upscale country club that often hosts the U.S. Open.  However, this is mere speculation; I have been too busy reading, writing, and rewriting to consider any alternative paths.